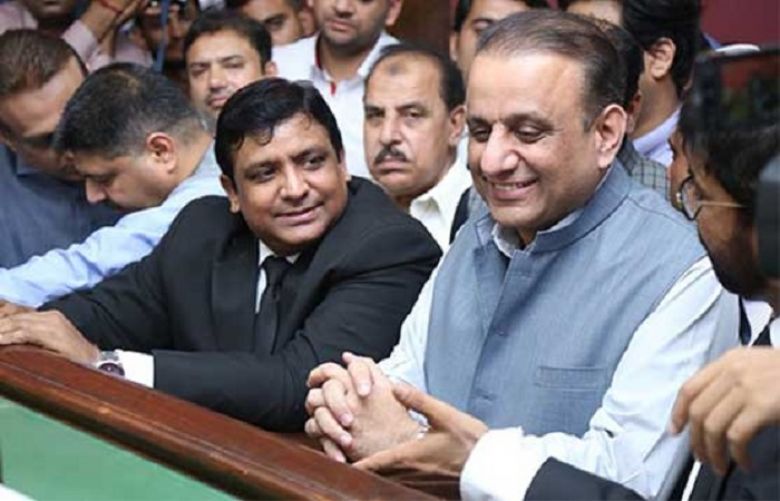 An Accountability court in Lahore on Monday extended judicial remand of Pakistan Tehreek-e-Insaf leader Aleem Khan for 14 days in assets beyond known means of income and offshore company case.

A two member bench of the LHC headed by Justice Ali Baqir Najfi.

At the outset of the hearing, Khan’s counsel Barrister Ali Zafar, said the NAB has arrested his client in assets beyond known sources of income reference without having concrete evidence.

“It has been three months since his arrest, but the accountability watchdog has failed in registering reference against him”, the counsel said.

He said the anti-graft watchdog body has no evidence against his client.

To, this the NAB prosecutor said, the bureau has acquired enough evidence against the former senior minister and the reference will be filed soon.

Earlier in the day, an accountability court had extended judicial remand of Aleem Khan in assets beyond means and offshore cases till May 27.

The PTI leader was presented in the court of Judge Najamul Hassan.

According to the petition, the National Accountability Bureau (NAB) arrested Aleem Khan over the charges of his offshore companies and assets beyond known sources of income.

The NAB in its charges against Khan alleged that the PTI leader was a common man in year 2000 and suddenly became a millionaire as his assets now worth Rs 871 million.

He remained Punjab minister from 2003 to 2007 and set up 35 companies, while his several bank accounts also surfaced, the anti-corruption watchdog claimed.