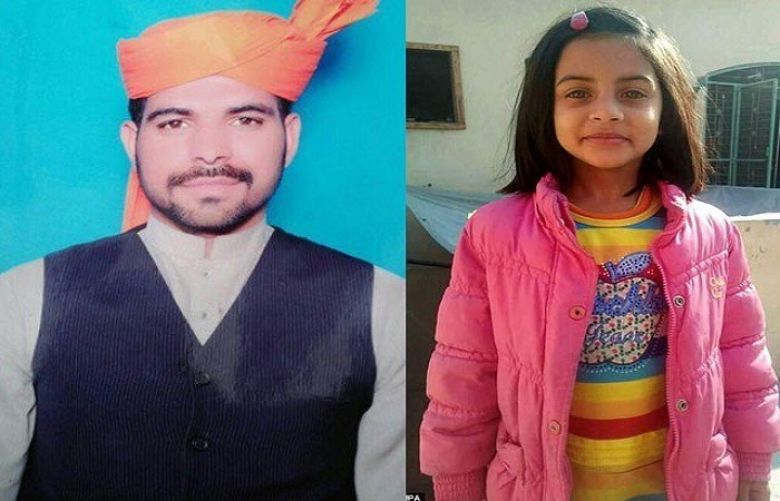 Imran Ali, who was convicted for the rape and murder of six-year-old Zainab Amin in Kasur earlier this year, was hanged to death in the early hours of Wednesday in Lahore's Kot Lakhpat Central Jail.

Ali was executed in the presence of both Magistrate Adil Sarwar and the deceased's father, Muhammad Amin, both of whom arrived early morning at the Kot Lakhpat Jail. Zainab's uncle was also present at Kot Lakhpat.

An ambulance had also arrived at the scene, accompanied by a brother of the convict as well as two of his friends. A medical officer as well as Kot Lakhpat's superintendent were in the jail as well.

Contingents of police and anti-riot forces surrounded Kot Lakhpat jail at the time of Ali's hanging.

Talking to the media after the execution, Ansari regretted that the authorities did not allow the live telecast of the hanging. He said that this was a "golden chance" for Prime Minister Imran Khan to "fulfil his promise to turn Pakistan into the state of Madina".

"Zainab would have been seven years, two months old today," he said. "Her mother is devastated from grief."

Ansari also thanked the chief justice of Pakistan and said that the "murderer had met his fate today".

After the execution, Ali's family — accompanied by police contingents — took his body to Kasur.

Late on Tuesday evening, jail authorities had arranged a last meeting of some 57 relatives with the death row prisoner.

Zainab's rape and murder ─ the 12th such incident to occur within a 10 kilometre radius in Kasur in one year ─ had sparked outrage and protests across the country following the recovery of the child's body from a trash heap a week after she went missing.

The heinous nature of the crime had seen immediate riots break out in Kasur — in which two people were killed — while #JusticeforZainab became a rallying cry for an end to violence against children.

Zainab had gone to a religious tuition centre near her house in the Road Kot area on Jan 4 from where she is believed to have been abducted. Her parents had been in Saudi Arabia performing Umrah, according to her family, and she had been living with a maternal aunt.

Soon after her abduction, her panicked family had received footage showing her walking with a stranger near Peerowala Road. On Jan 9, a police constable deputed to trace the girl recovered her body from a heap of trash near the Shahbaz Khan Road.

Police had said the girl seemed to have been killed four or five days earlier.

A first information report had been registered against the disappearance of the girl on Jan 5, with the victim's paternal uncle as the complainant in the case. Murder charges were added to the FIR on Jan 9, after the victim's body was recovered.

Police had confirmed on Jan 13 that the results of DNA testing of samples collected from the crime scenes pointed towards the involvement of one culprit in at least seven similar cases in the district.

The Punjab government had declared the arrest of Ali, the prime suspect, on January 23 after a widespread manhunt.

The ATC had on Feb 17, 2018, handed down death sentence on four counts to the 24-year-old convict, following a four-day jail trial at Kot Lakhpat Jail.

The death penalty was handed down under four sections of laws including 364-A of the Pakistan Penal Code (PPC) (kidnapping a person under the age of fourteen), 376 of the PPC (rape), 302-B of the PPC (murder) and section 7 of Anti-Terrorism Act 1997 (for terrorising society by an act).

The court had further awarded life imprisonment to the convict under section 377 of PPC (unnatural offence/sodomy) and seven-year jail term under section 201 of PPC (dumping the dead body). The court had also imposed a fine of Rs1 million on the convict to be paid to the legal heirs of the victim, in addition to a collective fine of Rs3.2m imposed under different sections of law.

Since then, Ali has been indicted and sentenced to death in the rape and murder cases of at least six other minor girls.

Appeals against death sentence
He subsequently filed an appeal in the Lahore High Court challenging the death sentence handed to him in the Zainab case in February, claiming that his trial was not fair. The LHC rejected his appeal and upheld the trial court's conviction. He then appealed to the Supreme Court against the conviction.

On June 12, the SC rejected Ali's appeal against the death sentence handed to him for the rape and murder of Zainab, noting that the petitioner had admitted committing similar offences with eight other minor victims and "in that backdrop, he did not deserve any sympathy in the matter of his sentences".

As a last resort, he sought clemency from President Arif Alvi, but his plea was rejected on Oct 10 and his death warrants were issued by an Anti-Terrorism Court two days later.

The ATC directed the jail superintendent to execute the warrants and submit a compliance report.

Child sexual abuse in Kasur
Kasur had last attained local and international notoriety in 2015 when a gang of paedophiles running a child sex ring was busted in the city.

The gang had allegedly abducted and sexually assaulted at least 280 children in the area, had blackmailed the families of the victims since 2009, and even sold video clips and images of the assault online.

In the aftermath of Zainab's murder, lawmakers and legal experts had suggested introducing appropriate legislation and stricter legal implementation in order to prevent such incidents in the future.

Senator Raza Rabbani had said that when the Kasur child abuse scandal surfaced in 2015, he had raised concerns that the outrage would die down within a few days, which is why it is necessary that the government take long-term measures to ensure the safety of children.

Laws for the protection of children must be made in line with international laws, he said, and existing laws that deal with crimes against women could be expanded to include crimes against children.

Laws tackling crimes against children must tackle brutality, child smuggling and different kinds of abuse, including sexual abuse, he had recommended, adding that stronger legal implementation and punishment of criminals is necessary to avoid such incidents from occurring.