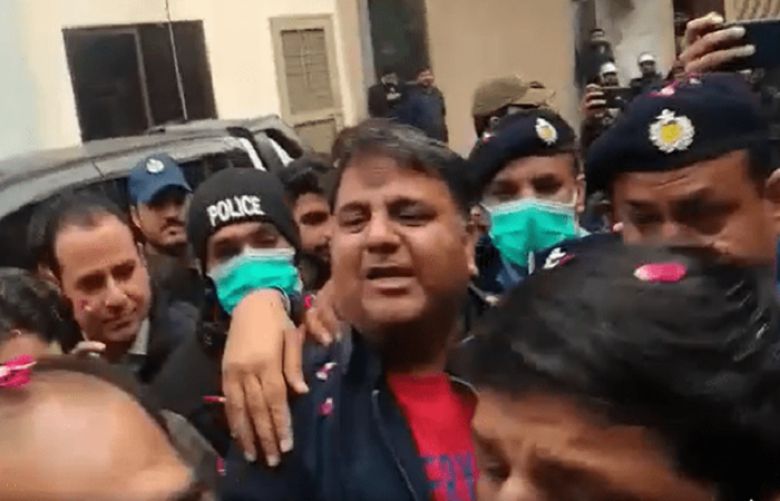 PTI leader Fawad Chaudhry was brought to the Cantt court in Lahore amid tight security on Wednesday, hours after he was arrested from outside his residence for “inciting violence against a constitutional institution”.

Earlier in the day, the former federal minister’s brother said that he was “taken away” in four cars that did not have any number plates at 5:30am. Faisal Chaudhry said that the family was unaware of Fawad’s location.

“We are also not being given any details of the FIR (first information report) registered against him,” he said. Faisal termed his brother’s arrest “illegal” and asserted that he will fight this battle in court.

At 10am, Fawad was brought to the Cantt court by officials of the Punjab Counter Terrorism Department and police. Upon his entrance, PTI lawyers showered rose petals on Fawad.

As the hearing began, the investigating officer requested the court to grant Islamabad police the PTI leader’s transit remand.

For his part, Fawad asked the judge to provide him with a copy of the FIR registered against him. He went on to say that he was proud of the charges against him. “These allegations were also levelled at Nelson Mandela.”

“It is being said that I have committed sedition […] I am a former Supreme Court lawyer and federal minister […] I should be treated with respect,” he told the court.

The PTI leader said that the way he was arrested was “inappropriate”. “Had they called me, I would have come myself.”

Commenting on his remarks against the Election Commission of Pakistan (ECP), he said that “the entire country is saying the same”.

Meanwhile, Fawad’s lawyer said a habeas corpus petition — a writ requiring a person under arrest to be brought before a judge or into court, especially to secure the person’s release unless lawful grounds are shown for their detention — filed by Fawad was pending in the Lahore High Court. “Until a decision is taken on that, a transit remand can’t be granted.”

Here, the court instructed the police to conduct a medical examination of Fawad and adjourned the hearing for an hour.

A first information report has been registered against the PTI leader at the Kohsar police station in Islamabad on the complaint of Secretary of the Election Commission Umar Hameed.

The complaint — a copy of which is available with Dawn.com — invokes sections 153-A (promotion of enmity between groups), 506 (criminal intimidation), 505 (statement conducing to public mischief) and 124-A (sedition) of the Pakistan Penal Code at Islamabad’s Kohsar Police Station.

It stated that Chaudhry, in a speech outside PTI Chairman Imran Khan’s house, threatened the ECP and said that “those who become part of the caretaker government [in Punjab] will be pursued until they are punished”.

Later in a tweet, the Islamabad police said that Fawad tried to “incite violence against a constitutional institution” and “inflame the sentiments of the people”.

It added that the case will be processed as per the law.