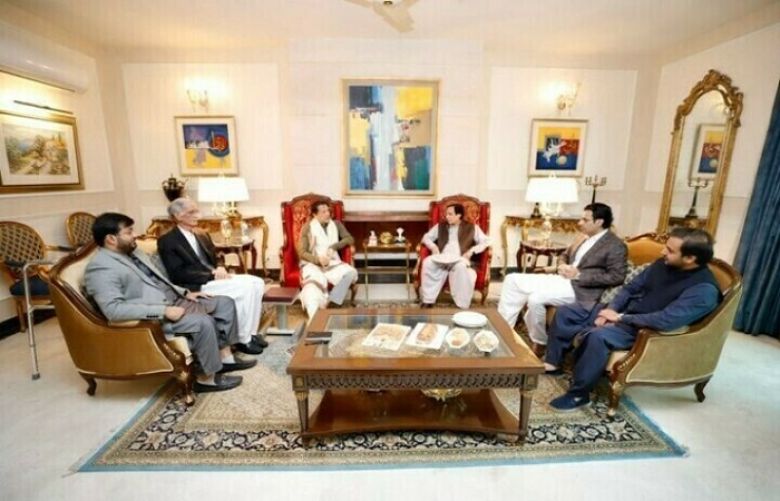 Punjab Chief Minister Chaudhry Pervez Elahi has assured PTI Chairman Imran Khan of standing by his side as the opposition in the provincial assembly mulls ways to overthrow the PTI-PML-Q-led coalition government in the province.

Khan — who called off his long march to Islamabad last week — has announced quitting assemblies across the country, including Khyber Pakhtunkhwa and Punjab.

The party's leadership, according to PTI Senior Vice President Fawad Chaudhry, has approved the dissolution of assemblies in both provinces, but the final decision will be made after further consultations.

The opposition — PML-N and the allied parties — has said that it would not back down from a challenge, but stressed that snap polls were not in the country's favour.

In his meeting with Khan at the PTI chief's Lahore residence Thursday, Elahi once again pledged his loyalty and stressed that he "owed" the Punjab Assembly to the former prime minister.

Elahi said he would not "hesitate for a moment" when Khan orders him to dissolve the assembly as he will keep supporting all of the PTI chief's decisions.

He added that the elements behind creating misconceptions in the camps of PTI and PML-Q would "fail again" as he slammed the opposition for claiming that they were in contact with the government's lawmakers.

"Imran Khan is indispensable," CM Elahi said and challenged the opposition to table a no-confidence motion against him. "They have failed before and will fail again."

The PML-Q leader said the opposition is "daydreaming" if it thinks it can overthrow the Punjab government. He added that the opposition does not have the required numbers.

"If the Punjab Assembly is in session, then the governor's rule cannot be imposed. It is my honest advice to the opposition: please read the rules of business."

"Whatever Imran Khan says, I will act without hesitation. Punjab Assembly [is a small thing], I will give my life for Imran Khan," the chief minister said.

In conversation with journalists after the meeting, PTI senior leader Pervez Khattak said that the meeting was good "overall" and that Khan would make the final call on all matters.

"Chaudhry and us, we are all one. Khan sahib is our leader. All the decisions that have been made will be unveiled later," the former KP CM said.

Khattak said both the leaders have reached a consensus on all matters and that CM Punjab has agreed to follow Khan's decisions. "He [Elahi] stands by his words."

The PTI leader also said that he did not want "groupings or divisions" within the party as he noted that the established has committed to staying out of politics.