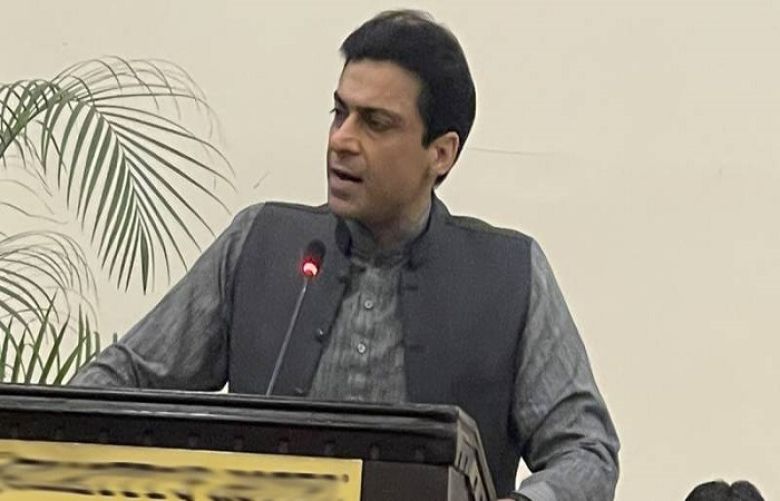 A Supreme Court bench at Lahore Registry on Saturday relegated Hamza Shahbaz to interim chief minister of Punjab - the status he held before July 22 - who would just serve as a ‘trustee’ as it heard the case against the ruling of the Punjab Deputy Speaker Dost Mazari which paved way for Hamza’s victory in the Punjab chief minister election.

This morning, Hamza Shahbaz had taken the oath as the CM again after defeating Pervaiz Elahi in the run-off election.

The hearing of the case has been adjourned till Monday which will be conducted in the Supreme Court’s main building in Islamabad.

The top court barred Hamza Shahbaz from making errant transfers and postings and directed him to work in accordance with the law and Constitution.

Hamza Shahbaz was also restrained from exercising any such powers which could benefit him politically.

The court said it would keep an eye on appointments during the span and those against merit will be declared null and void.

Earlier, the court termed the petitions against ruling of Punjab Assembly Deputy Speaker Dost Mazari as maintainable. The hearing resumed at 2:30pm after a gap of around four hours.

Other judges on the bench are Justice Munib Akhtar and Justice Ijazul Ahsan. The hearing is being conducted at Supreme Court-Lahore Registry.

As the hearing resumed, Mazari’s lawyer submitted his client’s reply in the court.

The court asked where the deputy speaker was. Mazari’s lawyer said that he was present in the court for assistance.

The chief justice ordered to move all unrelated people out of the courtroom and adjourned the hearing briefly.

Owing to rush in the courtroom, the court decided to carry out the hearing via video-link.

The chief justice inquired Mazari’s lawyer about the paragraph of the court’s verdict which was referred by the deputy speaker in his ruling.

“It is my first appearance. You are taking a difficult test from me,” Qadir said and read the ruling before the bench on the order.

Justice Ahsan said that in the verdict, the role of the parliamentary leader was clear and asked what was ambiguous in it.

The lawyer argued that different court verdicts in the past had various interpretations.

The bench said that it had made clear that the votes against the party line should not be counted.

The court asked how 10 votes of PML-Q were canceled.

The court said that in the broader perspective, the deputy speaker’s ruling was not in accordance with the Supreme Court’s verdict in Article 63(A) case.

Qadir argued that the bench should put itself in the deputy speaker’s place to which the court asked where the record of the election it had sought was.

The chief justice said they want to see if Mazari had the letter sent by PML-Q Chief Chaudhry Shujaat.

The chief justice said that Hamza would serve as a trustee as they could not leave the province without an administrative head.

The court ordered the deputy speaker to submit a written response and directed the Punjab government to do so as well.

Earlier, the bench said that the deputy speaker did not pinpoint the paragraph of the Supreme Court’s verdict on interpretation of Article 63(A) which he referred while pronouncing his ruling.

The matter apparently looks complicated, the bench said and expressed hope that all respondents would cooperate with the court.

In its application, the PTI said that the parliamentary head of PML-Q had directed the MPAs to vote for Elahi. It prayed to the court to declare Mazari’s ruling void.

During the hearing, Barrister Ali Zafar who was representing both the PTI and Elahi, said Hamza Shahbaz got 179 votes while his client Pervaiz Elahi secure 186 votes. Deputy speaker, however, rejected the votes of PML-Q MPAs.

Hamza has even taken the oath of the office, he added.

Zafar said that the deputy speaker read out the Supreme Court’s decision regarding the disqualification of lawmakers for not following the party line.

He said that the deputy speaker rejected the votes based on a letter from party head Chaudhry Shujaat Hussain. He, however, did not consider the role of the parliamentary leader, Zafar argued.

The court then issued a notice to the attorney general and sought an answer from him.

The bench has also summoned Deputy Speaker Dost Muhammad Mazari and ordered him to bring the record of the election with him.

The hearing was adjourned till 2pm.

PTI leader Fawad Chaudhry, talking to the media ahead of the hearing at 2pm, said that the ruling coalition wants to make the bench controversial and accused SAPM Fahd Hussain and his paid journalists of running a Twitter trend against the top court.

In his application, Speaker of Punjab Assembly had requested the court to hear the application today.

Mazari’s decision to cancel 10 votes of PML-Q MPAs came after he claimed to have received a letter from PML-Q Chief Shujaat Hussain which he read out in the House.

In the letter, Chaudhry Shujaat had directed his party members to vote in favor of Hamza Shahbaz in the run-off polls for CM Punjab.

“I confirmed the letter with Ch Shujaat Hussain thrice on the phone,” Mazari said.