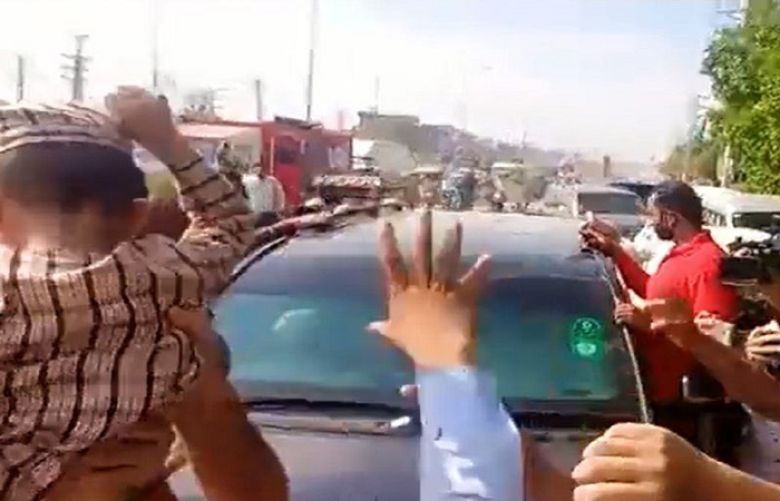 The Pakistan Tehreek-e-Insaf (PTI) on Sunday alleged that police and local administration instigated an attack on the former information minister Fawad Chaudhry’s vehicle amid Lahore by-election.

PTI Central Punjab Information Secretary Musarat Jamshed told the media that Fawad, along with former finance minister Shaukat Tareen, was visiting polling stations to inspect the polling process in PP-168 when his vehicle was attacked by some miscreant, who was later arrested from the Tehreek-e-Labbaik (TLP) Pakistan camp.

She alleged that police had played the role of spectator and provided protection to attackers who broke the windshields of Fawad's vehicle. However, the PTI leader remained safe during the attack, she added.

Jamshed underscored that it is a matter of concern that the PTI’s central leader was attacked in the presence of heavy police deployment.

Polling for by-elections for the 20 constituencies of the Punjab Assembly continued till 5pm in most districts with Section 144 implemented to establish law and order in the province.

Some unpleasant incidents were reported. According to the commission’s spokesperson, the Election Commission Control Room received six complaints related to fights between voters and political workers, out of which three were resolved immediately, and that “authorities are taking steps to control the situation”.

CEC Sikander Sultan Raja said in a statement that “strict action will be taken” against “those involved in creating issues in the election process” and that if candidates participate in such acts “they may also be disqualified”.

A fight is reported to have broken out between political workers at the polling station of Panjar in Rawalpindi.

Home Minister and Spokesperson for the Punjab government Attaullah Tarar has also taken notice of a dispute that broke out in PP-158 Lahore. He said PTI’s Jamshed Iqbal Cheema and Saeed Mahis had seriously injured a Pakistan Muslim League-Nawaz (PML-N) worker as he issued orders for the PTI leaders’ arrests.

In the same constituency, a fight broke out between PTI and PML-N workers at the UC Dharmapura polling station. The PTI polling agent accused the police of bias and said that “the police is allowing PML-N workers to enter, while I am being stopped despite the fact that I am a polling agent,” as he explained why the brawl had broken out.

Voters in the same constituency complained of voting area alterations. Saqleen and Yasir Mehmood, residents of Nai Abadi Garhi Shahu, said that “I am a PTI supporter, our vote has been changed. Our vote was shifted to Shalimar PP-148 area where polling is not taking place.” He also alleged that the votes of all PTI voters in constituency PP-158 were shifted to PP-148.

Polling was also halted in PP-168 for some time following agitation between PTI and PML-N workers.

An armed person identified as Abdul Rehman has also been arrested in front of the Basti Syedan Shah polling station of Lahore. The accused is reportedly a private guard of a local citizen named Dr Maarif and a mini-rifle was recovered from his possession.