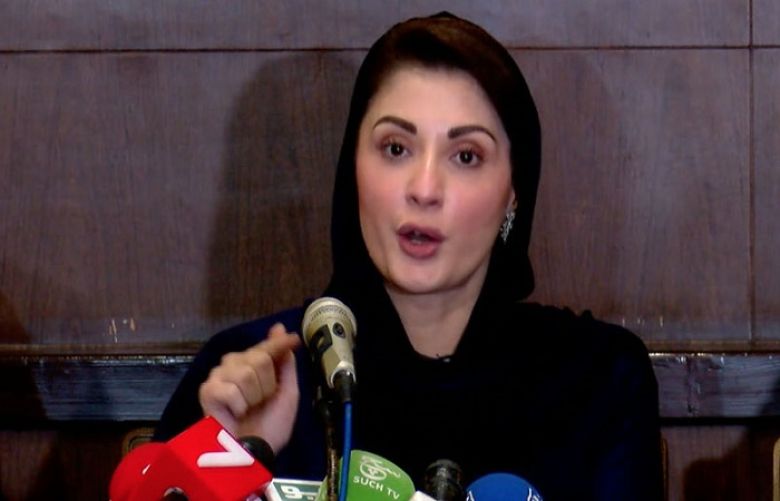 PML-N Vice President Maryam Nawaz Thursday berated PTI Chairman Imran Khan and his party for being "responsible" for the martyrdom of a policeman, who laid his life in the line of duty a few days back in Lahore.

Maryam was speaking to the press outside of the house of the martyred policeman, identified as Kamal Ahmed. She had gone there to meet Ahmed's widow and his five children.

"The martyred policeman's wife also blames Khan for her husband's death," she said, adding that the PTI chairman has kept his own sons safe in London but "deprived these five children of their father by killing him."

She said that "real freedom" begins at one's home, therefore, Imran Khan should first bring his children to Pakistan and teach them what real freedom entailed.

Talking about Khan's six-day ultimatum to the government to announce a date for the elections, Maryam said that the move was solely to hide his guilt.

She went on to say that Khan could not even mobilise 20,000 people for his march despite promising to bring two million people on the streets.

The PML-N vice said that the nation is well aware of the fact that Khan's agenda was to "spread anarchy in the country."

"People have recognised your lies and your fake foreign conspiracy as you still don't have the answer to what your government did in the last four years," said Maryam, adding that people have forced Khan to go back to Peshawar by terming the so-called "Azadi March" a barbadi (destruction) march.

Shedding light on the clashes between the PTI supporters and the police on May 25, the PML-N vice president said that while people were getting beaten up, Khan was enjoying a helicopter ride.

"His revolution kept flying in the air for a few hours," she interjected an ironic remark and added that Khan should "stop using the youth to fuel his lust for power" and "pray for the rest of his life in Bani Gala."

Speaking about the current political landscape of the country, the PML-N leader said that the situation was in control until last night but the PTI received the Supreme Court's permission to continue with the march which ended up exposing their fitna (evil).

She further said that the party used SC's decision to burn the capital to ashes. "Khan knew about the SC's decision which only limited his march to the F9 park but he continued to march towards D-Chowk despite the prohibition," said Maryam.

The PML-N leader also said she wanted the SC to know that PTI leaders, as well as former interior minister Sheikh Rashid, had themselves termed it a "violent march".

She asked the SC to review its decision as "it was not a leaderless march" adding that "all the violence that unfolded yesterday was in line with the directions of PTI leaders."