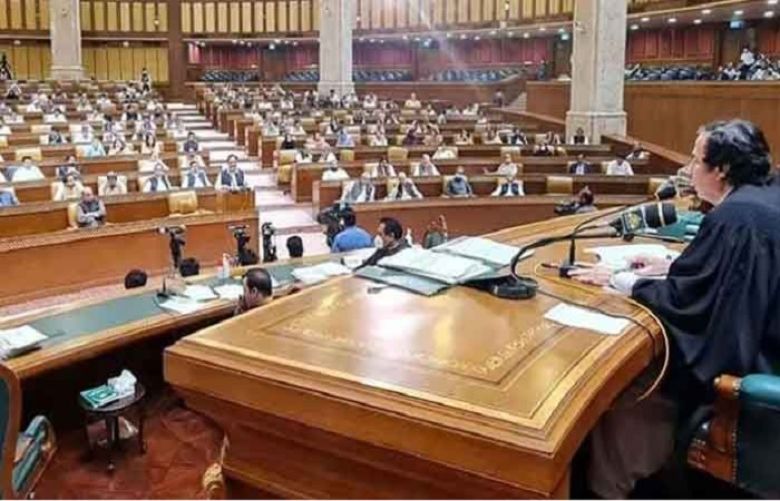 The no-confidence motion against Punjab Assembly Speaker Pervaiz Elahi was dismissed on Sunday after the much-anticipated session of the assembly was postponed till June 6.

The session was adjourned within six minutes despite it starting after a delay of two hours.

MPAs reached the PA to attend the meeting previously scheduled to begin at 12:30pm. However, the session couldn't be started on time as the lawmakers were stopped from entering the premises.

Security had been tightened around the Assembly in Lahore on Sunday morning. PA Speaker Pervaiz Elahi called the session today while cancelling the previous date of the assembly session scheduled for May 30.

The political situation intensified Sunday morning with the arrest of the PA Director-General for Parliamentary Affairs Rai Mumtaz after the announcement of an emergency session. The police were directed to stay on high alert and a heavy police force was deputed in the surroundings of the provincial assembly.

Police also barricaded different spots on Lahore's Mall Road, including the routes leading from CM House and Aiwan-e-Iqbal to the PA.

Earlier, the administration had closed the doors of the PA, while barbed wires were placed in front of the assembly building. Punjab Assembly staff said that even they are not allowed to enter the building.

Due to strict arrangements, even the security team of Punjab Chief Minister Hamza Shahbaz wasn't allowed to enter the Assembly. Meanwhile, PML-N decided to send only 15 to 20 MPAs inside the PA in the first phase as soon as the gates opened.

Earlier, the security team of Punjab Chief Minister Hamza Shehbaz was barred from entering the House. Meanwhile, PML-N leader Ata Tarar said that MPAs and media were not allowed to enter the provincial assembly.

“Speaker Pervaiz Elahi has brought goons from Gujrat,” he claimed, adding that “some people” were brought to the House yesterday night.

“You [Pervaiz Elahi] are disrespecting the House,” the PML-N leader added. He said they would enter the assembly accompanied by media persons.

He maintained that the government had submitted a no-confidence motion against the speaker as per the Constitution and vowed to challenge the speaker’s “illegal actions” in court.

Responding to a question, the PML-N leader said that the ECP has not de-notified the 25 defiant lawmakers of the House so far.

The PA session was due to begin at 12:30pm with the no-confidence motion against the speaker and deputy speaker on the agenda. However, the session couldn't be started.

A very noisy PA session was expected as the temperature was high on both sides.

Punjab police arrested Punjab Assembly Director-General for Parliamentary Affairs Rai Mumtaz in the wee hours of Sunday ahead of the PA session.

The Punjab Assembly spokesperson confirmed reports of Mumtaz's detention, saying that the police leapt the walls of the DG's house.

He added that the houses of PA Secretary Muhammad Khan Bhatti and Coordination Secretary Inayatullah were also raided.

The spokesperson further stated that they also have video evidence of the raids on assembly officials' residences and also accused police of vandalism during the raids.