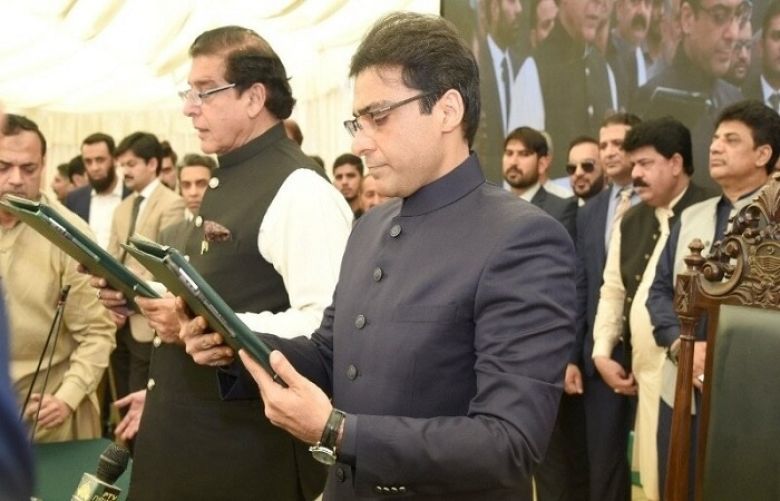 The PTI filed a petition in the Lahore High Court (LHC) on Thursday, requesting it to declare Hamza Shehbaz's election as the Punjab chief minister "illegal" and to restrain him from working in that capacity.

Hamza was elected as the Punjab CM on April 16, during a provincial assembly session that was marred by mayhem and violence. He faced several delays in assuming charge of the CM Office because of then Punjab governor Omar Sarfraz Cheema's refusal to administer him oath.

Hamza approached the LHC thrice, seeking directions for his oath to be administered. He was finally sworn in on April 30.

Deputy Speaker Mazari took "unlawful" aid from the police and provincial officials for holding a "sham and fraudulent" election, following which he communicated that Hamza had won, the petition said.

It noted that votes of 25 dissident PTI MPAs were also counted in the final tally for Hamza. While the then governor Cheema had refused to accept the election results, Hamza was administered the oath due to "judicial overreach", it contended.

"As per the investigation conducted by the [then] honourable governor of Punjab, the respondent secretary of the provincial assembly has tendered a report detailing the various dimensions of the election held on 16.04.2022 and has categorically informed the [then] honourable governor that the referred elections were/are unlawful; thus consequently the certificate issued by the respondent deputy speaker/acting speaker was/is without any lawful sanction/legal authority," the petition reads.

After assuming office, Hamza had launched a campaign of "extreme vengeance against the petitioners as well as all those who are politically aligned with them," the petition claimed.

According to the petition, Hamza's election was in violation of the Constitution and the Rules of Business of the Punjab Assembly. It recalled that Hamza had approached the LHC for holding the election, adding that he treated it as an urgent matter because he had the support of 25 dissident PTI MPAs, which was a violation of Article 63 of the Constitution.

The petition also referred to the Supreme Court's interpretation of Article 63-A, related to the disqualification of lawmakers over defection, in which the apex court said the vote of defecting lawmakers would not be counted.

An analysis of the Supreme Court's interpretation would lead to the conclusion that the chief minister's election was unlawful, it stated.

"On this ground alone and keeping in view the scope and intent behind Article 63-A of the Constitution, the election held on 16.04.2022 [should] be declared as being without lawful authority and consequently be struck down."

The petition also claimed that the election had lost its sanctity because the assembly floor was occupied like a "beehive by private unwanted persons, including civilians, ghundas (thugs), guests, persons of various agencies and local police".

In addition, voters had been intimidated and forced to cast their votes in Hamza's favour, it stated.

The petition also stated that members who were going to vote for PTI-PML-Q's candidate Chaudhry Parvez Elahi were "pushed out" from the gallery and therefore, could not participate in the election.

Deputy Speaker Mazari had acted as an "election agent", it claimed. The petition requested the LHC to declare Hamza's election void ab initio (illegal) "in the interest of justice and fair play".

It also requested the court to declare the office of the chief minister vacant and to stop Hamza from working and portraying himself as the chief executive.