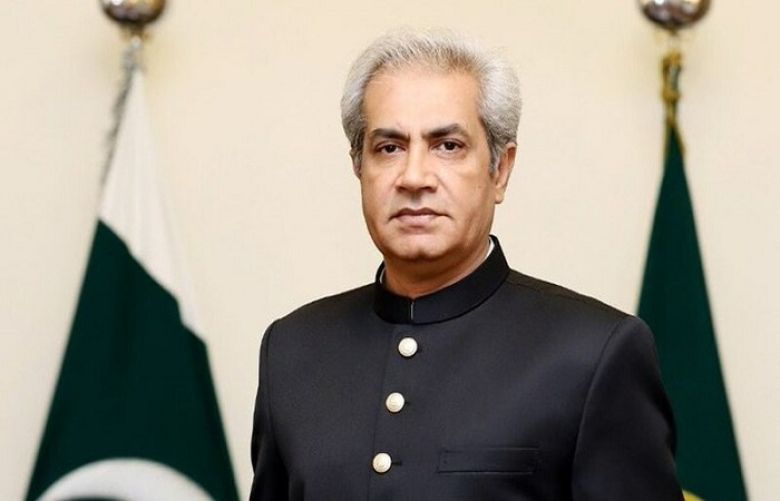 Omar Sarfaraz Cheema has been denotified as Punjab governor on Tuesday hours after President Alvi’s rejection to approve Prime Minister Shehbaz Sharif's summary to remove Omar Cheema from his post.

In a statement issued by the President's Secretariat, President Alvi has conveyed to the prime minister that the Punjab governor cannot be removed without his approval.

However, in contrast to the President’s rejection of the PM’s advice, the cabinet division issued late Monday night a notification regarding the removal of Omar Cheema as governor of Punjab.

“In terms of Article 101 and proviso to Article 48 (1) of the constitution of the Islamic Republic of Pakistan, read with serial No. 2D of schedule V-B to the Rules of Business, 1973 and the Prime Minister’s advice (s) rendered on 17-04-2022 and 01-05-2022 for removal of Governor of Punjab, Mr Omer Sarfaraz Cheema ceases to hold the office of the Governor Punjab, with immediate effect,” the notification said.

According to the notification, henceforth, the speaker of the Punjab assembly will perform his responsibilities as acting governor of Punjab till the appointment of the new governor.

According to the sources, security has also been withdrawn from Omar Cheema following his removal from the governor’s post.

Incumbent Governor Cheema has been causing problems for the PML-N in Punjab ever since he was given the post by Imran Khan during his last days in power. The governor had triggered a constitutional crisis after he refused to administer the oath to Chief Minister Punjab Hamza Shahbaz.

Hamza was finally sworn in after the Lahore High Court ordered NA Speaker Raja Pervaiz Ashraf to administer the oath.

Cheema had last week said that he would arrest CM Punjab Hamza Shehbaz Sharif if provided “a subedar and four soldiers” and had also asked Chief of Army Staff (COAS) General Qamar Javed Bajwa to play his "role" in the implementation of the Constitutional framework in Punjab.

The federal government has nominated Baligh-ur-Rehman as the new governor of Punjab.

Rehman, who hails from Bhawalpur, was elected from the NA-185 constituency in 2008 and 2013. He had earlier served as the state minister for education, interior and narcotics control when Nawaz Sharif became prime minister after the PML-N’s victory in the 2013 elections.

Cheema, meanwhile, has refused to accept the orders regarding his removal issued by the Cabinet Division.

He said President Alvi rejected the summary for his removal sent by the premier due to "exceptional circumstances" but the Cabinet Division still issued the notification for his removal.

Terming the notification “unconstitutional”, he said that he would consult legal experts and announce his strategy.