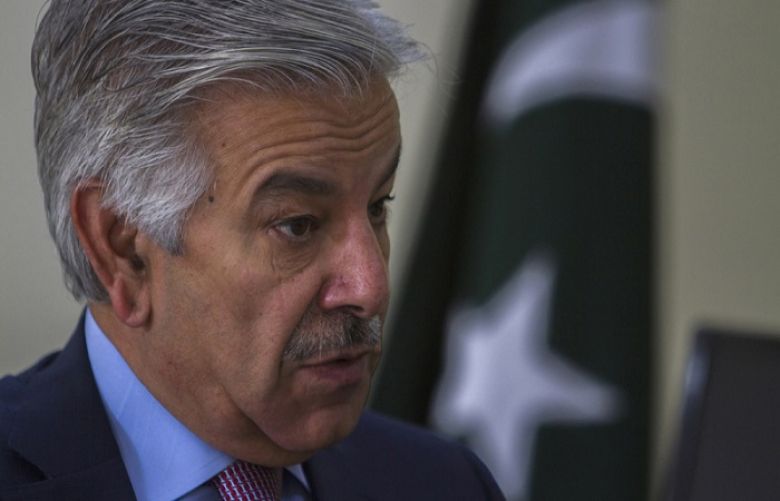 The Lahore High Court (LHC) on Wednesday granted post-arrest bail to PML-N's senior leader Khawaja Asif in an inquiry into assets beyond means and money laundering initiated against him by the National Accountability Bureau (NAB).

A two member bench of the LHC, comprising Justice Alia Neelum and Justice Syed Shahbaz Ali Rizvi, announced the verdict, ordering Asif's release from jail upon the submission of a bail bond worth Rs10 million.

"The instant petition is accepted and the petitioner is admitted to post-arrest bail subject to his furnishing bail bonds in the sum of Rs10m with one surety in the like amount to the satisfaction of the learned trial court," reads the short court order.

Arguments on the PML-N leader's bail application were completed in three days.

"Khawaja sahab belongs to our vanguard which is not afraid of prisons or chains.

"The politics of revenge in the name of accountability has been exposed once again today with the release of Khawaja Asif on bail!" said the PML-N president.

"The selected ruler of the time was unsuccessful in breaking Nawaz Sharif and his companions and embarrassment has embraced him today as well."

During the hearing at the LHC today, the NAB prosecutor argued that the PML-N leader had been elected as a senator in 1991 and his assets in 1993 had amounted to Rs5.1m. He added that Asif continued to be elected as an MNA from 1993 to 2018.

He said the PML-N leader had earned Rs50m from a local business, earned a total income close to Rs333m and had invested Rs157m. Meanwhile, Asif's total expenses had been Rs454m, said the NAB prosecutor.

"The income is Rs333m and the expenditure is Rs454m. A negative balance is showing for Khawaja Asif," he said, adding that Asif had received money from Dubai and details of its nature and money trail were not provided.

"Was the money that came in Khawaja Asif's account in dollars or rupees?" questioned Justice Neelum upon which she was told that dollars were received and were later converted into rupees.

The NAB prosecutor said that the Federal Investigation Agency had only investigated the issue of the PML-N leader's iqama (work permit) and the salary associated with it while NAB was investigating the assets beyond means case.

"What evidence does NAB have that Khawaja Asif misused his authority?" asked Justice Neelum to which the NAB prosecutor responded: "NAB does not have a case of kickbacks and corruption against Khawaja Asif."

The NAB prosecutor informed the court that Asif's negative balance had reduced to Rs150m from Rs230m, adding that while this was not mentioned in the investigation report, there were documents available to support it.

"A different view is appearing in NAB's two answers. You will have to tell how much money Khawaja Asif deposited in the accounts. At the moment we have two contradictory answers of NAB," said Justice Neelum.

The bench further asked why the time and duration had been changed between the reports to which it was told: "It was NAB's goodwill that it reduced Khawaja Asif's controversial amount."

The bench also pointed out that on the one hand, NAB had told the court the investigation was ongoing while on the other hand, the prosecutor had stated that the reference had been sent to the anti-graft watchdog's chairman for final approval.

"What is all this? Say one thing," Justice Neelam said.

The prosecutor stated that the PML-N leader used to receive a salary of 9,000 AED from the international company.

The NAB prosecutor informed the court that a letter had been written to the company that employed Asif but they had not joined the investigation.

Meanwhile, Asif's lawyer presented a copy of his work permit in court, arguing instead, that Asif used to receive a salary of Rs87m from the company.

The prosecutor said NAB had been asking Asif for information but he had refused to provide it. Upon this, Justice Neelum asked him to "open your eyes a bit, all this is written on the iqama."

The NAB prosecutor said the anti-corruption body did not consider the work permit to be valid because it was not verified to which the bench replied that the court had gotten the verification done.

NAB had arrested Asif in Islamabad on Dec 29, 2020 and later shifted him to Lahore where he remained on physical remand till Jan 22.

The accountability watchdog has alleged that Asif had failed to explain the sources of his income and assets. It had said he was first elected senator in 1991 when his assets stood at around Rs5 million. It said Asif's assets had swelled to Rs221m by 2018, which were beyond the known sources of his income.

It added that Asif had yet to disclose the source of income of a foreign remittance he received from Dubai amounting to Rs100m.

In a bail petition sought from the LHC in March, Asif's legal counsel contended that the petitioner, during his 22-day physical remand with the NAB, had not been confronted with any evidence that could prove that he owned assets disproportionate to his known sources of income.

The petition had contended that no recovery had been made from Asif that could connect him with the allegations of corruption as alleged in the grounds of his arrest. It had asked the court to release the petitioner on bail.