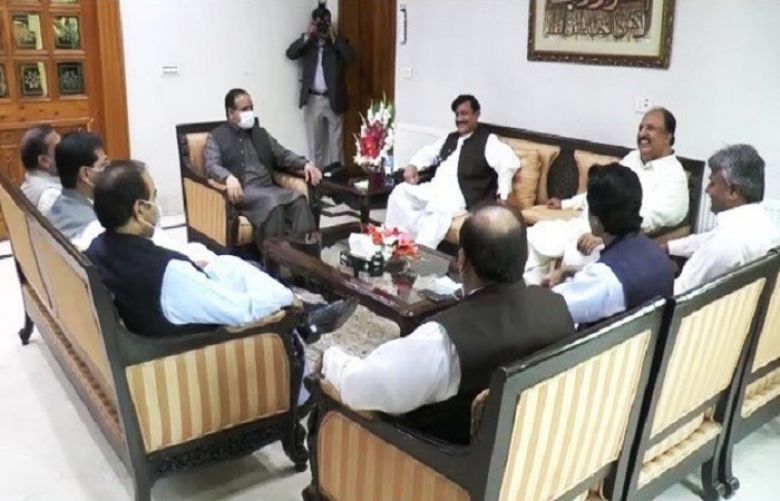 Chief Minister Usman Buzdar assured members of the PTI lawmakers who are supporting Jahangir Tareen that he would address their concerns.

The development took place today when Buzdar had hosted a luncheon for the group. A six-member delegation comprising Saeed Akbar Khan Nawani, Ajmal Cheema and Nauman Ahmad Langrial met the chief minister to share their concerns with him.

In response, Buzdar assured the delegation he would address them following which the lawmakers reposed their confidence in the chief minister.

During the meeting, Buzdar said the party was united under the leadership of Prime Minister Imran Khan and told them that his doors are open for them.

"Never do injustice to anyone," he said.

He further said that politics of revenge is not the Punjab government's style, adding that reservations shared by the JKT group will be addressed.

Speaking to media after the meeting, Saeed Nawani said the group discussed all issues with the chief minister, including the upcoming budget.

"We stand with the government and are satisfied with the meeting," he said.

Nawani said the group wanted an impartial inquiry [of cases against Jahangir Traeen] and will accept its outcome. Langrial said the group is a part of the PTI and would remain so.

Sources said Soon after the meeting, the chief minister issued instructions to release development funds for the JKRT group members and directed the bureaucracy to resolve all legal issues.

Sources also said the lawmakers would follow the party discipline and support the government in the budget.

The development comes just a day after Tareen had announced a separate group in the Punjab Assembly in response to the "revenge tactics" employed against him and his supporters, clarifying that the group is still a part of the party.

The group's parliamentary leader in the Punjab Assembly, Saeed Akbar, is set to address the floor of the house tomorrow and will inform the assembly about the "retaliatory actions" taken against the Tareen group, sources said.