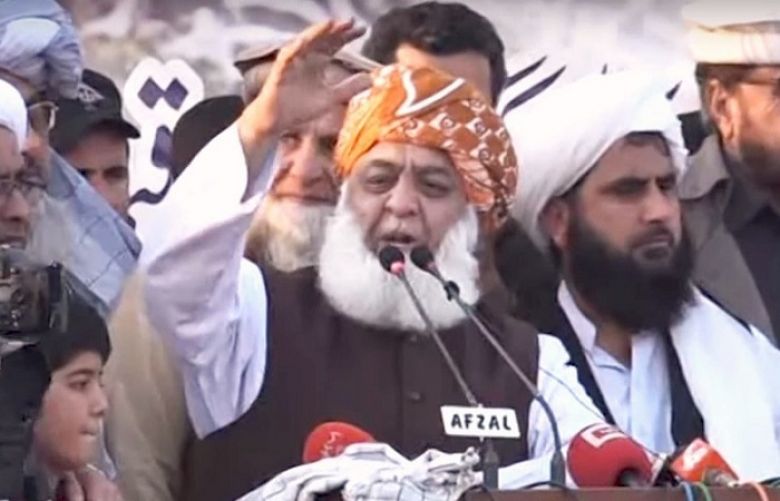 Pakistan Democratic Movement (PDM) chief Maulana Fazlur Rehman on Sunday vowed to go ahead with a public gathering in Multan scheduled for November 30 despite the PTI-led government's efforts to stop the Opposition coalition.

Addressing a press conference in the city, flanked by former prime minister Yousuf Raza Gilani and PML-N's Rana Sanullah at a JUI-F seminary, Maulana Fazlur Rahman said the Multan rally would be held at all cost and all the leaders would reach the venue come what may.

The PDM leadership held a consultative meeting at a JUI-F seminary to review the situation after the Punjab government launched a crackdown against the PDM workers who had entered Multan's Qila Qasim Bagh stadium by breaking down the gates and removing containers.

Over 30 Opposition workers including Yousaf Raza Gilani's son, Ali Qasim Gilani, were arrested in the late-night operation by the police to take back the control of the stadium.

"PDM will hold the rally tomorrow at the same venue at all cost and all the leaders would reach the venue despite government threats of legal action," Fazl said. "This is state terrorism."

Fazl said that the Opposition alliance has formulated the strategy to counter government action.

"We are not ready to accept the lawlessness in the country and if they try to stop our rally, the flood of the people will sweep them away."

He threatened to use force if authorities stopped them.

Rana Sanaullah said that Maryam Nawaz will reach Multan at all cost.

Separately, Prime Minister Imran Khan lambasted the Pakistan Democratic Movement for holding rallies and jalsas amid a worsening coronavirus situation in the country and the Opposition parties' bid to save what he termed was "looted wealth & corruption".

In a series of tweets Sunday afternoon, PM Imran Khan said Pakistan was facing not only the COVID-19 pandemic but a "a political leadership that has never gone through any democratic struggle" and was not well-versed with the challenges ordinary citizens experienced.

The premier criticised the Opposition leaders for lacking empathy and their families that "looted national wealth to further impoverish our masses".