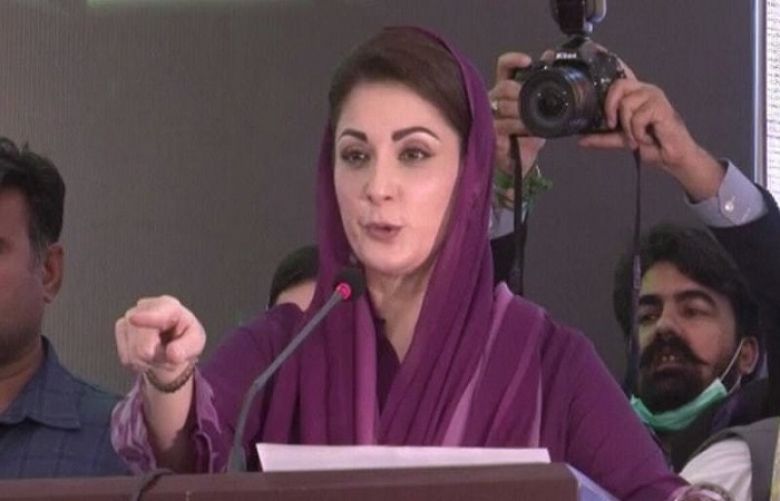 The PML-N vice-president launched the campaign in the party's bid to encourage its young workers to bring about a positive change in the country.

Talking about the campaign, she said that it aimed at providing the youth with political awareness. "Sher Jawan is a campaign to remind the youth about the reason behind Pakistan's creation."

"It is a campaign that aims to make the youth understand the Constitution, restore their faith in democracy, and warn them against the hybrid government," she said, adding that it eyes to fulfil the dreams of the youngsters.

Maryam, speaking on what true "slavery" is, said that it embodies itself in moves that "take away the right to speak, force people to bow down before the powerful, induce fear in people, restrict them from asking for their rights and ask them to remain silent".

"People are given their rights as if it is charity and even those are provided after the powerful approve," she said.

"People are sent to jails when they demand their rights — this is slavery," Maryam said.

Shedding light on the Karachi incident, she said: "Slavery is when the inspector-general is abducted in Karachi and forced to sign the orders of (retired) Captain Safdar's arrest."

The PML-N leader said that the IG was told that he could not leave until he had signed the order. Slamming the authorities, she asked: "Are policemen lesser creatures? Are they not human beings?"

The PML-N leader said that the ideals that led to Pakistan's creation are still not being followed. However, after witnessing the enthusiasm of the attendees, she said that the country is "in safe hands".

Speaking about the students of Balochistan, whose scholarships have been canceled, she said: "Six hundred children held a long march for [over 10 days] but the government did not even bother to inquire about their problem."

Maryam went on to say that the Constitution was the book that contained the rights of the people. "It mentions what should and should not take place in Pakistan, what is right and what isn't."

Urging the audience to read the Constitution, she said that even if a single demand of PML-N supremo Nawaz Sharif went against it, then people should not support him.

"Nawaz Sharif talks about upholding the Constitution and the oath (taken by army officers)," she said, adding that "one should not cast blame" on the "uniform".

"This uniform is worn by martyrs who protect us at Siachen," she said.

Maryam said that when the vote is not respected, then students are deprived of laptops and scholarships, adding that inflation also surges when this happens.

According to an earlier tweet, the preparations for Pakistan Democratic Movement's December 13 jalsa in Lahore were discussed during a meeting of PML-N's MPs meeting.