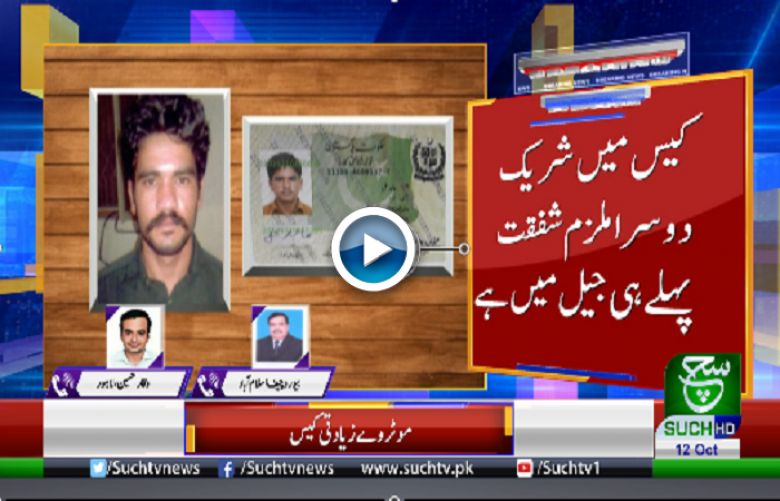 A month after evading the police, the prime suspect in the motorway rape case, Abid Malhi, has been arrested from Faisalabad.

Police said that Abid is being brought to Lahore from Faisalabad where his DNA test will be taken.

The other suspect who allegedly raped the woman, Shafqat, is in jail on judicial remand. The Intelligence Bureau (IB), Special Branch of the police and other agencies had done a recce of the suspect and tipped off Punjab Police about the whereabouts of Malhi before they went to Faisalabad to apprehend him.

The motorway rape case's prime suspect had managed to evade arrest four times by escaping the clutches of the Punjab police ever since he has been on the run.

How did police manage to catch the motorway rape suspect?

Sources said that a trap had been laid out for the motorway rape prime suspect, falling into which he was apprehended by police. Sources said  that Malhi's wife was given a SIM which she used to call him.

Malhi told his wife in one of his calls to her that he would meet her in Faisalabad. When the motorway rape suspect arrived in the city to meet her, he was nabbed by police officials in plain clothes.

Sources said that Malhi was arrested without any torture or scuffle. He was apprehended easily and taken from Faisalabad to Lahore.

Punjab Information Minister Fayyaz Chohan said that the provincial government would do everything in its power to make an example out of the motorway rape suspect.

Talking about how the Punjab government aims to prosecute Malhi as he had managed to be secure a bail previously despite rape charges, he said:

Chohan said that without speaking to the motorway rape victim, the Punjab government had managed to identify the suspects within 72 hours.

"No shortcomings will take place from [the government's side]," Chohan said of the case.

He said that Malhi had managed to escape the clutches of the police due to detailed media hype and reporting about him.

"Due to the media's hype regarding the case, he escaped police raids four to five times as he used to get information from his sources about the police," said the information minister.

Chohan said that the Punjab police had "intentionally cooled down things" over the things and observed that Malhi had also relaxed over the past 10-12 days which ultimately led him to become less careful.

The minister said that to hide details of the investigation from the public at large, he used to "play down questions asked to me" about the motorway gang-rape case during press conferences.

The information minister stressed that if the prosecution, police, and the judicial system play their role in the right manner, then such people would not escape the law again.

According to reports, Shafqat and Abid were at the Lahore-Sialkot motorway on Sept 9 with an intention to rob any motorist when they saw a stationary white-coloured car on the roadside. The two approached the vehicle, threatened and robbed its occupants, and then gang-raped the woman in front of her children after dragging them to a nearby field.

Police had earlier disclosed that apart from Shafqat's statement, his DNA had to match as well, which is why the samples had been sent to the Punjab Forensic Science Agency (PFSA). The arrest was made with use of footprint-tracking as well as DNA samples.

The PFSA had Abid's prior DNA records from 2013, when he had raped a woman and her daughter and was booked alongside four others under Sections 376 and 395. While he had been bailed out at the time, his DNA and fingerprint records were saved in the lab's data bank.

The lab's system identified him as the same rapist from more than seven years ago.

What is the motorway rape case about?

Malhi has been on the run since September 9, when it was reported that two robbers had allegedly gang-raped a mother of three on the Lahore-Sialkot motorway in an area falling within Gujjarpura police's jurisdiction.

The woman, along with her children, was driving to Gujranwala when she was forced to stop at the Gujjarpura section of the motorway after running out of fuel, at around 1:30am.

She immediately called a relative and sent him her location. He asked her to also dial the Motorway Police helpline 130 from which she reportedly received no response.

In the meantime, two robbers reportedly approached the car, broke the window, and took the woman and her children to nearby bushes where they allegedly raped her in front of the children.