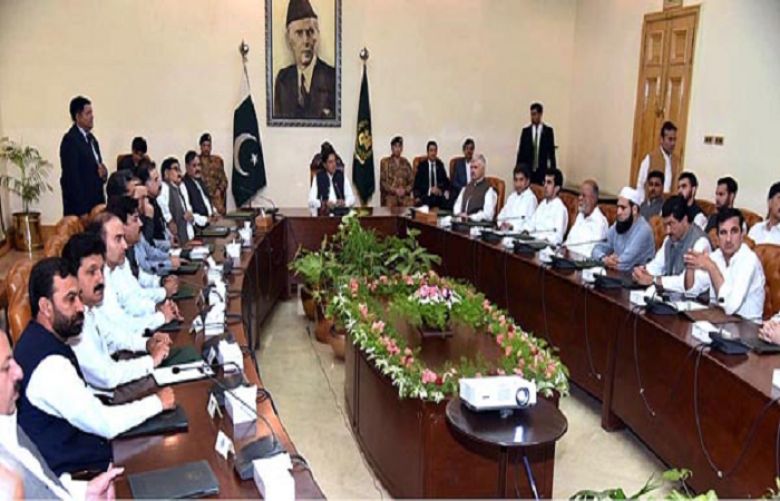 In a meeting with the members of the provincial cabinet during his brief visit to Peshawar, he said the government would also launch business loans scheme for the youth as another step towards the country’s development.

Referring to the prevailing condition of the national economy, the Prime Minister said from the very first day he had been hinting at tough days ahead as the government inherited a record fiscal deficit.

He said the brotherly countries including Saudi Arabia, UAE and China extended urgent assistance to provide a breathing space to the economy and the government is thankful for their gesture.

Prime Minister Imran Khan has directed the Khyber Pakhtunkhwa cabinet to ensure price control of eatables in the province.

He also directed for formulation of a well coordinated strategy to promote information technology and vocational training in the province.

Prime Minister Imran Khan has said the government has resolved to improve public sector hospitals as per international standards and there is no plan to privatize them.

Addressing a fund-raising Iftar dinner of Shuakat Khanum Memorial Hospital in Peshawar last night, he said reforms would be introduced by rectifying administrative and management system of the government hospitals which are currently in poor state of affairs.

The prime minister said his government wants to introduce the health system which was enforced in the Shaukat Khanum Memorial Hospital.

He said a big lie is being propagated about the privatization of government hospitals and declared in clear terms that there is no such plan under consideration.

Referring to the doctors’ protest in Peshawar, Imran Khan said the government would not step back from introducing the reforms in the public sector hospitals at any cost.

A few doctors are politically motivated to sabotage those reforms.

He resolved that the government would not yield to any pressure and continue to improve standard of those hospitals on the pattern of Shaukat Khanum Hospital where people are getting best healthcare facilities and treatment.

He also thanked donors for generously contributing towards the cancer hospital, which, he said, provided free treatment to 75 percent cancer patients.

The Prime Minister also asked the people to pray for successful oil and gas discovery from Karachi deep sea exploration, which, he said, would cater to the national energy requirements for next 50 years.

He further said the the nation would soon hear a good news to that effect.