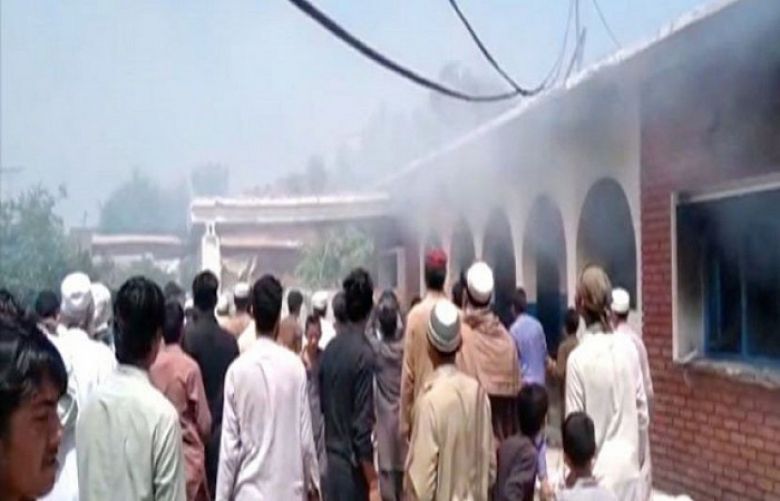 Police in Peshawar arrested nine more suspects on Wednesday for faking the illness and hospitalisation of school children in Mashokhel village and setting a hospital on fire to spread panic and misinformation about the ongoing countrywide polio campaign.

Earlier on Tuesday, police arrested Nazar Muhammad, a resident of Peshawar's Mashokhel area, after videos circulating on Twitter showed him standing in the medical complex, where the children from a local school were admitted on Monday with complaints of illness following administration of the anti-polio vaccine, and instructing them to "fall asleep" and pretend to be unconscious.

Superintendent of Police (SP) Peshawar Sahibzada Sajjad said that the school principal's brother was among the nine arrested for damaging the property of the medical complex.

The nine suspects were arrested after being identified in videos and two pistols and as many Kalashnikovs were seized from their possession, the Peshawar SP said.

"A total 10 suspects have been arrested so far of which five have been nominated in the First Information Report (FIR). A case was registered against 12 people in total," he added.

The Khyber Pakhtunkhwa government on Monday launched a three-day anti-polio campaign, in which thousands of polio workers were tasked to visit schools and madrassas to administer the oral anti-polio vaccine to children under five years of age.

In the midst of the campaign, around 40 children from a school in Mashokhel village were brought to a hospital with complaints of diarrhea, nausea and headache.

As the news of the children’s supposed illness spread like wildfire in Peshawar and nearby areas, panicked parents started rushing their children to hospitals.

The Lady Reading Hospital, Khyber Teaching Hospital and the Hayatabad Medical Complex were soon flooded with anxious parents bringing in their children.

Despite assurances from the authorities that the anti-polio vaccine was completely safe, enraged residents broke down the main gate and set fire at the Mashokhel Hospital in Peshawar.