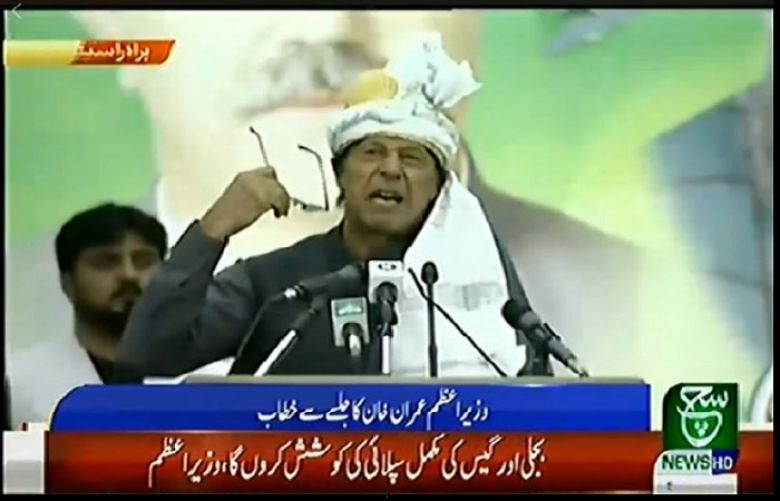 Prime Minister Imran Khan on Friday heavily criticised his political opponents for what he termed their efforts to hide their corruption and incompetence during a rally in Jamrud town of Khyber Agency.

The premier, while addressing a huge crowd of supporters, said that people like Zardari (PPP co-chairman) are claiming that they can topple the current government while Fazlur Rehman (JUI-chief) is preparing for a million march, adding that these “spineless” leaders can’t harm the government.

“Zardari, this government is not going anywhere, but yes, you are going to jail soon,” said Imran Khan while referring to former president.

He maintained that Zardari and his son, PPP-chairman Bilawal Bhutto, can’t become leaders for they have no political struggle to their credit but a forged will.

“How can people who only have a (forged) will as their only claim to leadership become leaders? you (Bilawal and Zardari) have not done any struggle?,” asked Imran Khan.

The PM maintained that the recently concluded train march by PPP chairman Bilawal was a mock exercise as “people were brought by giving them Rs200 each”.

About Fazlur Rehman, he says that the JUI-F chief is saying that he will hold a million march against the government but can’t even do a small rally.

“Fazlur Rehman is someone who lost his seat (during elections), his example is that of a kid who fielded all day but on his turn to bat, got bowled out on the very first ball,” said Imran Khan.

He added that the JUI-F chief is what one calls a “Rondu” (a kid who refuses to accept failure) who after losing his wicket, runs away with the stumps.

The PM also criticised former PM Nawaz Sharif’s sons Hassan and Hussain Nawaz by saying that both are evading corruption inquiries on the pretext that they are foreign citizens despite the fact that their father ruled this country for years.

He repeated his resolve to “punish the corrupt politicians” and claimed that the opposition parties just want to pressurize the government to get an NRO- a euphemism for relief in accountability cases.