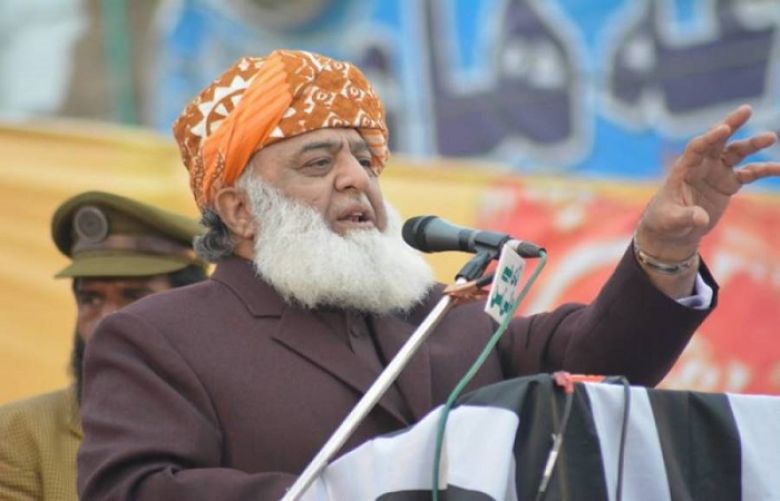 Addressing a press conference in Bannu, he said that religious scholars belonging to the JUI-F are falling victim to target killing. "We should be told who are the killers otherwise the state institutions must accept responsibility," he added.

He said that state institutions have occupied many seminaries. "They call madrassas centres of terrorism but they also seek cooperation from religious scholars of these madrassas," he added.

Fazl said that the institutions should not make a mockery of the situation and should not do politics. "Does the state want the youth to take up arms after getting emotional? Even the servicemen would not have saved the country if it wasn't for the religious scholars. Despite this, we're being punished."

He said that "crazy and stupid" people are surrounding Imran who are following a "fool". "Against whom jihad should be done is saying that he's doing jihad."

The PDM chief also warned that he will make the earth so hot for Imran Khan that his supporters will not be able to place their foot on it, threatening the ousted premier to "stay within his limits".

The JUI-F leader said that he knows what forces were behind the former premier. "When this army was supporting, you [Imran] had no issues and you were fine with the army but now when the general became neutral so you're calling him an animal? We know your masters. They have told you to abuse me because this is how politics work in Pakistan."

Fazl said that Prime Minister Shehbaz Sharif is unnecessarily being polite. "I have asked the government to put Imran Khan in jail... get Rana Sanaullah into action," he said and questioned why the decision on the foreign funding case is being delayed.

The PDM chairman also said that "we are being asked to clean up the economic mess created in the last four years in four years".

"This is a short-term government, it should take short-term decisions instead of long-term ones," he added.

He revealed that he had opposed raising the prices of different commodities during the first meeting in this regard. "In the first meeting, I had said don't talk to the IMF and do the agreement on new terms but everyone opposed. Nawaz Sharif and I became helpless," he added.

Fazl further said that he wanted to see the judiciary beyond doubt where no one can object to their decisions.