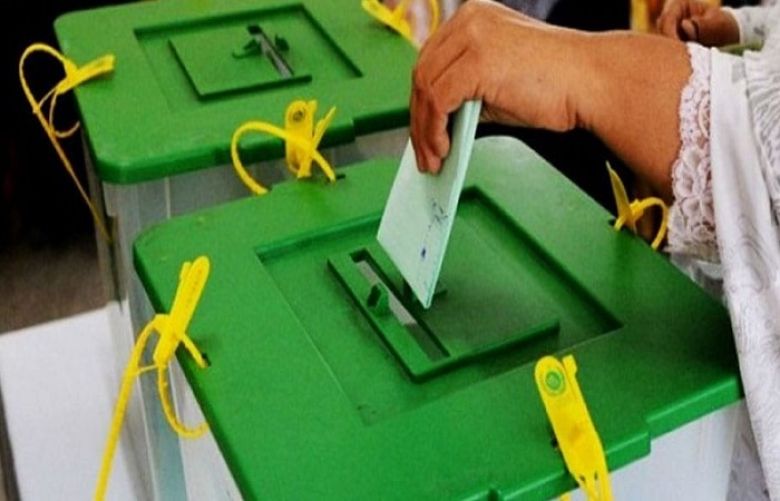 The counting of votes in local government elections across 17 districts of Khyber Pakhtunkhwa is underway after the close of polling time at 5pm, on a day that saw several incidents of violence break out.

Tensions ran high in different parts of the province, with at least four people killed and eight others injured in a series of attacks including a suicide bombing and a shooting. There were also reports of rockets being fired.

Polling in the 17 districts today, including Peshawar, Charsadda, Nowshehra, Mardan, and Peshawar, marked the first phase of the local body polls, with the next phase to take place at a later date.

Strict security arrangements have been made, with a total of 79,479 police and other law enforcement agencies' personnel deployed in the districts where balloting took place.

Even then, law and order was broken and a violence-marred beginning to the local government elections in the province was witnessed.

At least two people were killed and six others were injured in a suicide blast in Bajaur's Mamond tehsil.

In addition, two people were killed and three others were injured in a firing incident near a polling station in Takht Nusrati tehsil of Karak.

According to police, the deceased included a cousin of PTI MNA Shahid Khattak and a gunman. Polling was stopped after the incident.

The perpetrators were able to escape after the attack.

District Police Officer Imran Khan said that an independent councillor candidate, Muzzaffar Khan, with some companions attacked the venue. The group broke six ballot boxes, tore up votes and even took some votes with them.

The DPO said that a case against the candidate and 150 others is being registered and that efforts are underway to arrest the culprits.

It emerged that an argument broke out between some women voters at the venue of which the male members of the family took note and descended upon the polling station to sort.

The DPO said that polling was stopped and the matter of re-polling will be addressed later.

Baka Khel polls halted after rigging allegations
Furthermore, the polling process in Baka Khel tehsil of Khyber Pakhtunkhwa's Bannu district was halted after disruption in the law and order there.

A statement issued by the Election Commission of Pakistan (ECP) said that the new date for polling in Baka Khel will be announced later.

Leader of the Opposition in KP Assembly Akram Khan Durrani had levelled allegations against a provincial minister of PTI of storming into five polling stations in Baka Khel and taking the polling staff hostage.

Durrani, while speaking to Geo News, claimed that provincial minister Shah Muhammad Khan abducted the polling staff of five polling stations and took the polling material with them.

He said that the abducted polling staff members are "kept at a petrol pump".

Durrani also accused Khan of opening fire on the police. He said that the relevant deputy commissioner and district police officer have been informed about the matter but the administration seems helpless in this regard.

The ECP's spokesperson said that KP's chief election commissioner has formed a special committee to probe the matter.

Following the incident, the security in DIK and nearby districts was enhanced.

The polls in numbers
According to the Election Commission of Pakistan (ECP), 12.66 million voter are registered across the 17 districts, with 7.015 million male voters and 5.653 million female voters.

Of the others, 3,905 candidates are flexing their muscles for the seats for women councilors, 7,513 for peasant councilors, 6,081 for youth councilors and 282 for minority councilors.

As per reports, 876 women councilors have already been elected unopposed in different village and neighborhood councils across the province.

A large number of minority councilors have also been elected unopposed.

A total of 9,223 polling stations and 28,892 polling booths have been set up for today's elections.

Of these, 2,507 polling stations have been declared most sensitive, 4,188 sensitive, while 528 have been categorized as normal.

Meanwhile, 860 polling stations have been designated as sensitive, 165 as most sensitive, and 224 as normal in the provincial capital.

Security arrangements
Around 11,000 policemen and personnel of other forces have been deployed for security during polls in Peshawar alone.

An official said that in addition to the police, Frontier Constabulary personnel would be deployed in over 200 most sensitive polling stations in the provincial capital. Deployment to all the polling stations has been completed.

Besides the Ababeel squad, rapid response force and other forces will also remain alert to rush in case of any mishap in an area. The cops have been directed not to allow brandishing of weapons, aerial firing or creating any law and order.

Inspector-General of Police Moazzam Jah Ansari chaired a meeting on the security arrangements for the polls on Saturday and directed the officers to ensure foolproof security.

For the first time, cops from the erstwhile tribal areas have also been deployed in different districts of the province for election security duty.

Today marks the first time that local government polls are being held in districts of the erstwhile Federally Administered Tribal Areas (Fata) .