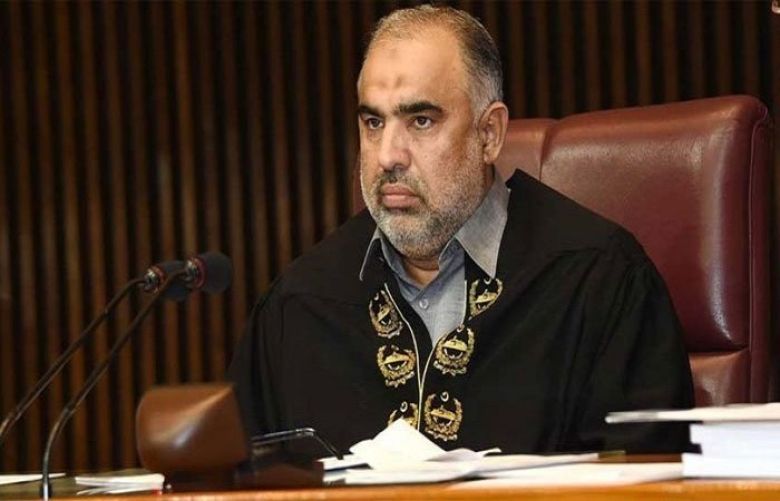 Swabi's district monitoring officer (DMO) of the Provincial Election Commission has issued a notice to National Assembly (NA) Speaker Asad Qaiser for violating the code of conduct for the upcoming local body elections in Khyber Pakhtunkhwa, it emerged on Saturday.

The notice, a copy of which is available with Dawn.com, was issued on December 10, 2021, and states that there is an audio clip of the NA speaker, making the rounds in electronic media, wherein he is appealing to voters for their support and promising government funding to PTI candidates, "saying that project tenders are in process and soon these tenders will be notified".

Separately, the DMO sent the audio clip and a letter to the Pakistan Electronic Media Regulatory Authority (Pemra) chairperson, asking him to carry out a forensic analysis of the clip to ascertain its authenticity and track its origin.

He further requested the Pemra chairperson address the matter on an urgent basis and provide the required information by December 15.
According to the election code of conduct, after the issuance of the election schedule, the president, prime minister, governor, speaker, deputy speaker of any assembly, chairman and deputy chairman of senate, federal and provincial ministers, advisers to the prime minister, chief ministers or any other holder of public office shall not visit the area of any local council to announce any development scheme or to canvass or campaign for any candidate or any political party.

The DMO directed Qaiser to appear in person or through his counsel at his office on December 13 to explain his position regarding the violation of the election code of conduct and directions of the Election Commission of Pakistan (ECP).

In case of non-compliance with the DMO's directives, the matter will be referred to the ECP "for the initiation of necessary proceedings against you (Qaiser)" under the Election Act 2017, the notice says.

Meanwhile, Bannu DMO concluded a case regarding violation of the election code by Leader of the Opposition in Khyber Pakhtunkhwa Assembly Mohammad Akram Khan Durrani after giving him a warning.

Durrani was issued a notice a day ago for attending two rallies held as part of the election campaign.

His order read: “The activities, which are not allowed under the law by you like representatives, gave a bad impression to the whole public of Bannu district which is against the basic spirit of law and have shown concern by all concerned quarters which necessitates taking action under the code of conduct.”

On Friday, Peshawar and Bannu DMOs had fined several treasury and opposition lawmakers, including PPP Chairperson Bilawal Bhutto-Zardari and Sindh Chief Minister Murad Ali Shah, Rs50,000 each for violating the code of conduct for the upcoming local body elections.