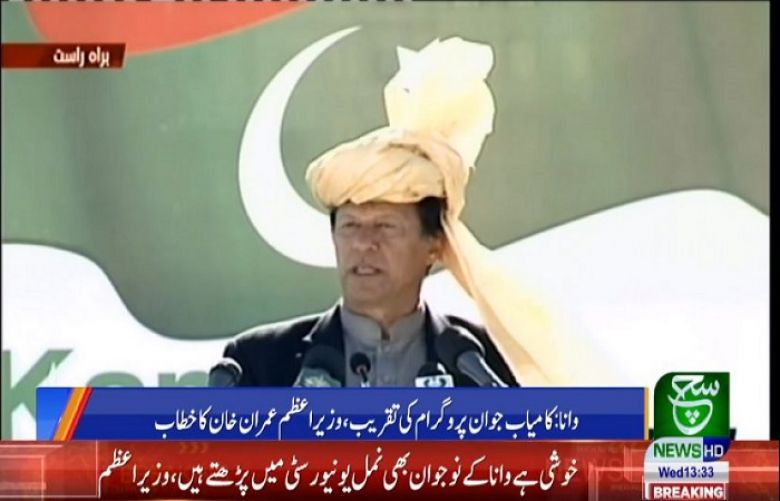 Prime Minister Imran Khan announced on Wednesday that 3G and 4G services will be available in Waziristan from today.

PM Imran shared that the news with the people of Waziristan while addressing a Kamyab Jawan Programme's cheque distribution ceremony in Wana.

The premier shared that the 3G and 4G services were not available in the region earlier as the government feared that it might be used for terrorism. He added that he spoke to the army leadership about the issue and was informed that it was the need of the youth of the area.

“I spoke to the army and we decided that we will provide this facility,” said PM Imran.

PM Imran told the people that he will bring an olive revolution to the area, as the product is commonly grown in the areas. He said that olive will bring a lot of money to the area. He also announced that a dam will be built in the area to resolve the water problems.

The PM assured the people that his government will work on uplifting the poor segments of the society and backward areas including the tribal districts.

"Special emphasis will be given to the education sector and provision of livelihoods to the people of tribal districts," said PM Imran. The premier also assured the people that apart from scholarship the government will also build schools, colleges, universities, and technical institutes in the tribal districts.

Imran Khan said the loans under the Kamyab Jawan Program are just the beginning and its scope will be further expanded. He said more funds will be poured into the program from next year so that more loans could be given to the people.

The PM said assistance will also be provided to the tribal people under the Ehsaas program.

The prime minister was accompanied by the chief minister and governor of Khyber Pakhtunkhwa.

Later, the PM will be briefed about the development works going on in the region.

Special assistants Dr Sania Nishtar, Usman Dar, and Shahbaz Gill are also with the prime minister during the visit to the tribal region.