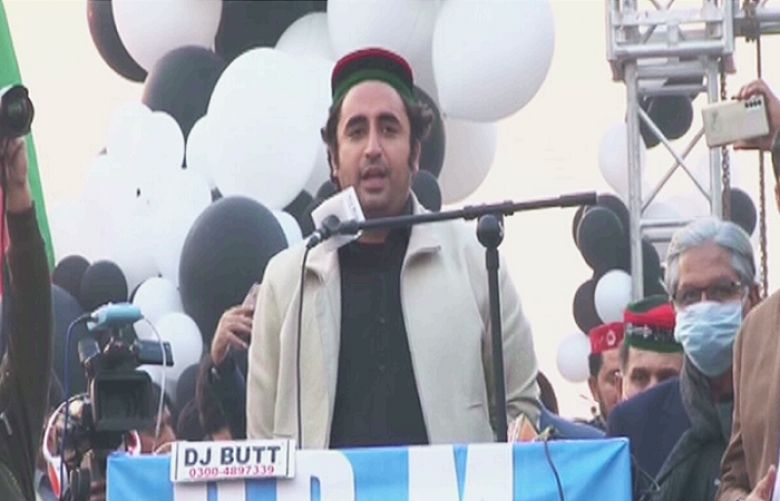 The Pakistan Democratic Movement (PDM) put on a show of power with a rally in Peshawar today, vowing an "end" to the incumbent government with January as its "last month in power".

The gathering was held despite failing to procure permission to do so as well as a warning given by the Khyber Pakhtunkhwa government of a threat to security.

In view of reports received of a possible terror attack on the gathering, strict security arrangements were made.

The central leadership of the PDM, including Maulana Fazlur Rehman, Maryam Nawaz, Mahmood Khan Achakzai, Aimal Wali Khan, Sardar Akhtar Mengal and Aftab Sherpao, were all present on stage, with a series of speeches by various political leaders delivered one after another.

PDM chief Fazlur Rehman was the last to address the event. He regretted PML-N vice president Maryam Nawaz was unable to attend and expressed his condolences over the death of her grandmother Shamim Akhtar.

He also extended his condolences to the families of Justice Waqar Ahmed Seth and Tehreek-e-Labbaik Pakistan chief Khadim Hussain Rizvi over their passing.

Fazlur Rehman said that all political parties agree and it is the movement's "clear stance" that the incumbent government came to power through a "rigged election".

He claimed with the huge turnout witnessed in all the PDM rallies so far, the government has been "left bewildered".

Bilawal says January to be 'govt's last month in power'

PPP chairman Bilawal Bhutto-Zardari delivered a long speech at the gathering, vowing that January will be the incumbent government's "last month in power".

Bilawal said that the people will decide how Pakistan will be governed and what kind of leadership will rule it.

He claimed protests are taking place in Gilgit-Baltistan against election rigging there.

"A voice is rising from within Gilgit-Baltistan, saying 'do not rob the vote'," Bilawal said.

Addressing the people of the province in particular, he said they will never be left to fend for themselves, accusing the incumbent government of abandoning them.

"The entire Pakhtunkhwa is demanding 'go, Imran, go!'," he claimed, adding: "This is the land of the brave, the honourable."

Bilawal said that terrorism has reared its ugly head once more and "we will not allow this puppet to let it take hold again".

"We know how to safeguard this land," he added.

The PPP chairman said that the "burden of the selected government" is being borne by the common man.

"First there was a flour, sugar, and oil crisis, and now a gas crisis will arise," he said, adding that people cannot even buy eggs, let alone chicken any more at the rates they are going for.

He vowed to give KP its due share, lamenting that due to the "incompetency of the FBR (Federal Board of Revenue") Rs160bn were not given to the province.

Bilawal asked why it is that the benefits of the China-Pak Economic Corridor are not being shared with the people of KP.

"These rulers shouted the most against corruption but turned out to be the most corrupt," he said, adding: "Does NAB not see what kind of corruption was done in Malam Jabba? Does it not question how sewing machines led to the development of buildings in New York?"

Bilawal swore that NAB itself will be "held accountable". "When the time comes for a reckoning, people will hold them all accountable," he said.

In the midst of Bilawal's address, PML-N vice president Maryam Nawaz briefly appeared on stage and addressed rally participants, asking for prayers for her grandmother who passed away this morning in London as well as the health of her father, former prime minister Nawaz Sharif.

Leaders of the various Opposition parties including PPP, PML-N, ANP and others that are a part of the 11-party alliance have said that they do not need anyone's permission for the meeting and they have come out "to save Pakistan".

Fireworks were set off by the PPP at the venue last night. The display fuelled the enthusiasm of the party workers gathered there.

"One Trump [has left office], we will send the Pakistani Trump packing," he said, referring to US President Donald Trump's failure to win a second term in office and the Opposition's aim to oust Prime Minister Imran Khan.

Meanwhile, due to the PDM rally, the entry of heavy vehicles in Peshawar district is closed from morning till night, while those coming from Islamabad have been directed to get off at Mardan Rashkai Interchange and use Nowshera GT Road Perezkori Bridge.

Those entering Peshawar will have to take the Charsadda Road route, while those coming from the southern districts will enter Peshawar from Frontier Road Matni, Sarband and Bara Road via Ring Road.

Special Assistant to the Chief Minister KP Kamran Bangash said that a "call was traced this morning" due to which the threat of terrorism has increased for the public gathering.

Bangash said that the security of the rally has been further enhanced and the PDM leaders and the management of the venue have also been informed about the threats to security.

It must be noted that after the spike in infections in the country owing to the second wave of coronavirus, the government has banned all outdoor gatherings of more than 300 people.