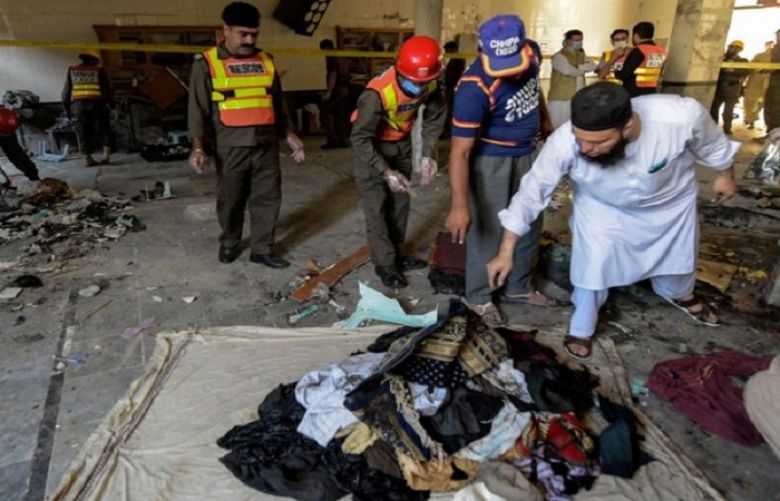 At least eight people were killed and more than 100 injured in a bomb blast on Tuesday inside a seminary in Peshawar’s Dir Colony.

Police and rescue service arrived at the crime scene and launched operations. KP Police said initial investigations revealed that the time-bomb was planted inside a bag.

There were nearly 1,000 children in the seminary at the time of the blast. Majority of the victims are children and instructors as the blast took place during classes at the religious school. According to AFP, teachers and boys as young as 7 were among the wounded.

The injured were moved to Lady Reading Hospital where at least five are in critically wounded. LRH officials confirmed receiving at least seven bodies and over 70 injured. Another 36 were shifted to Naseerullah Babar Memorial Hospital.

No group has claimed responsibility of the attack.

"Most of those killed and injured were hit by the ball bearings and some were badly burnt," hospital official Muhammad Asim Khan told AFP. All of the dead were men aged between 20 and 40, he said.

KP Minister Shaukat Yousufzai said Chief Minister Mahmood Khan had summoned a meeting to discuss the security situation. He revealed that Quetta and Peshawar were on threat alert following which security had been heightened.

Yousufzai said the seminary staff and children were soft targets. “Terrorists always aim for soft targets. This area has been peaceful for a long time,” he said.

Special Advisor to KP CM on Information Kamran Bangash regretted the incident and said the injured will be provided all medical facilities. “This is the second biggest terrorist attack after the APS tragedy.”

Bangash noted that there was no security officials posted at the seminary. “The National Counter Terrorism Authority (Nacta) had issued a threat alert for religious schools,” he recalled.