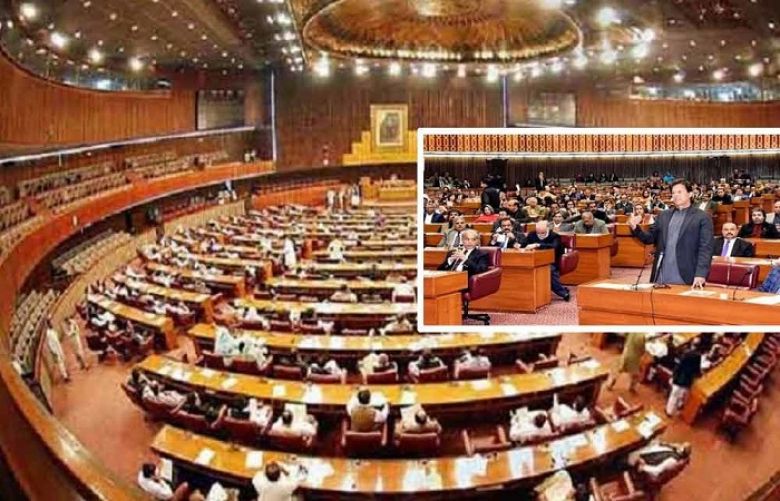 The opposition on Tuesday objected to a resolution presented by the government condemning India’s unilateral move to revoke Article 370 and strip occupied Kashmir of its special status.

Speaker National Assembly  adjourned the session soon after the opposition objected to the resolution saying that it did not mention India’s revocation of Article 370.

In response to the opposition parties heckling Minister of Human Rights Shireen Mazari remarked that the opposition was “there to make noise and not discuss the Kashmir issue.

PPP Senator Raza Rabbani said the main issue was not highlighted in the resolution.

Minister for Railways Sheikh Rasheed also highlighted the need to mention Article 370, which according to him was the most significant matter that needed to be discussed in the session.

On the demand of the NA speaker, Azam Swati amended the motion and mentioned Article 370 in the earlier tabled resolution.

Information Minister Firdous Ashiq Awan said that the opposition should stand with the government against atrocities inflicted on innocent Kashmiris by India.

Addressing the media, Firdous said that the Kashmir issue is not an isolated issue; it is a matter of concern for every Pakistani.

“Kashmir runs in the blood of every Pakistani,” she added.

The information minister also stated that the United Nations (UN) Security Council should take note of the revoking of Article 370 and should take a stand against it.

“Kashmir needs our help! The opposition should support our government and should speak up against India,” said Firdous.

The joint parliamentary session was summoned by President Dr Arif Alvi to discuss the recent surge in unprovoked firing and shelling on the civilian population and the use of cluster bombs by Indian forces in Azad Jammu and Kashmir.

India on Monday revoked the special status of occupied Kashmir and rushed through a presidential decree in a bid to fully integrate its only Muslim-majority region with the rest of the country, hours after imposing a major security clampdown in the region.

Home Minister Amit Shah told parliament that the president had signed a decree abolishing Article 370 of the constitution giving special autonomy to the Muslim-majority Himalayan region.

Occupied Kashmir and Ladakh will now be Union Territory with a legislature, said Indian media.

“The entire constitution will be applicable to Jammu and Kashmir state,” Shah said, ending the occupied territory’s rights to make its own laws.

Following the Indian move, the foreign secretary summoned the Indian high commissioner to the Foreign Office and conveyed a strong démarche.

The foreign secretary conveyed Pakistan’s unequivocal rejection of these illegal actions as they are in breach of international law and several UN Security Council resolutions, said a statement issued by the Foreign Office (FO).