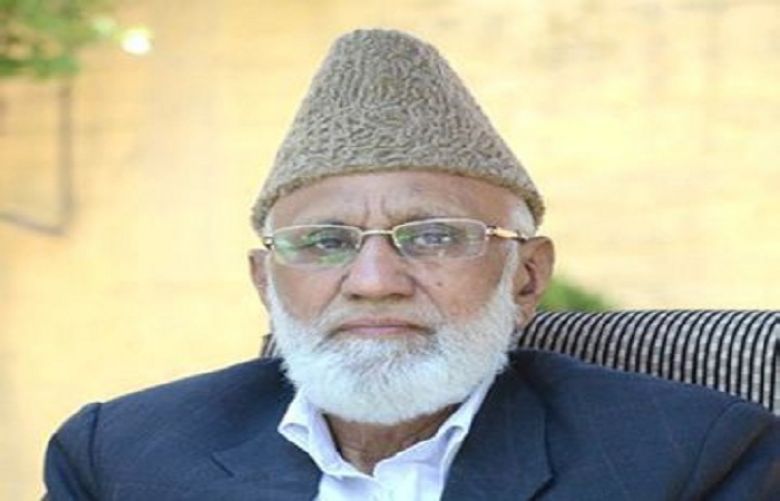 In occupied Kashmir, the Chairman of Tehreek-e-Hurriyat Jammu and Kashmir, Muhammad Ashraf Sehrai, while appreciating Pakistani Prime Minister, Imran Khan’s statement on Kashmir has said that Islamabad has always played its role at the international level to highlight the Kashmir dispute in its historical perspective.

Prime Minister Imran Khan in his message on the World Human Rights Day observed on Monday, the 10th December, had said that Pakistan would continue to lend full diplomatic, political and moral support to the people of Jammu and Kashmir.

Muhammad Ashraf Sehrai in a statement issued in Srinagar, today, said that despite using all suppressive tactics, ruthless Indian rulers had failed to break the commitment of the Kashmiri people towards the ongoing freedom movement.

The students of Kashmir University launched a signature campaign as a mark of protest against the ongoing human rights violations by Indian troops in the territory. Scores of students raising pro-freedom slogans assembled outside the Iqbal Library building of the university in Srinagar and took part in the campaign.
Meanwhile, Indian troops launched cordon and search operations in Dearpora and Malikgund areas of Shopian and Brath Kalan in Sopore, today.

Dukhtaran-e- Millat Chairperson Aasiya Andrabi along with her aides Nahida Nasreen and Fahmida Sofi were produced before a court in New Delhi in fake charges framed against them by India’s National Investigation Agency. The judge directed the NIA to provide proofs against the Kashmiri women leaders on the next date of hearing.

Bashir Ahmed Wani, the father of martyr PhD scholar, Dr Mannan Wani, in a media interview in Srinagar said, Indian troops frequently raid their house at Lolab in Kupwara and harass the inmates, particularly the women members of the family. Dr Mannan was martyred by the troops in October, this year.

A report submitted by the senior superintendent of Kashmir police before the Human Rights Commission in connection with the killing of a civilian, Bilal Ahmed Ganai, by Indian troops in Pulwama on 27th of May in 2018 confirmed that the victim was neither armed, nor was involved in any criminal activity. The police report came in response to a petition filed by rights activist, Muhammad Ahsan Untoo.

A declaration, unanimously passed at a conference in London, called for cessation of all forms of state violence and the respect for all fundamental human rights in occupied Kashmir. The event, which was jointly organised by South Asia Centre for Peace and Human Rights, International Council for Human Rights and Kashmir Youth Assembly UK & Europe demanded that a fact-finding mission be sent to evaluate the most disturbing situation in the occupied territory.