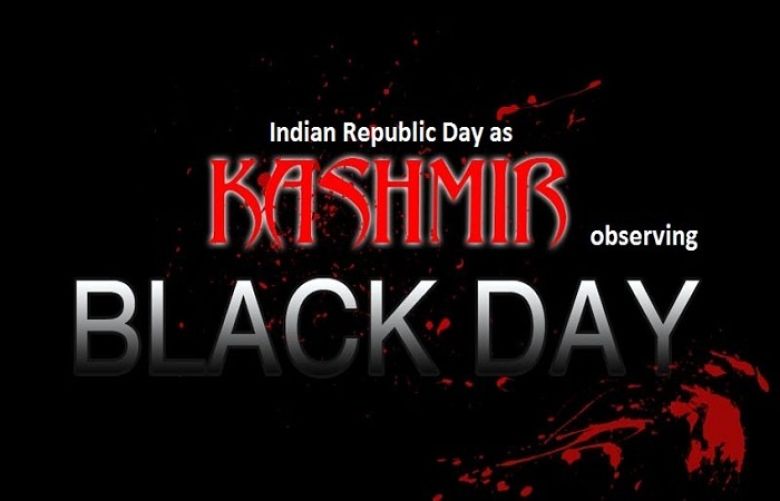 People of Jammu & Kashmir living on both sides of the line of control and rest of the world are observing the Indian Republic Day as black day today (Wednesday). This protest is meant to invite the attention of international community towards the 75-year long unlawful Indian occupation of Jammu & Kashmir which deprives them of their internationally recognized right of self determination.

The day will be marked with a complete shutdown in Indian Illegally Occupied Jammu and Kashmir.

Kashmiris observe the Indian Republic day as black day every year to protest against the continued long Indian subjugation of the Indian Illegally Occupied Jammu and Kashmir. It also intends to bring into focus brutalities and custodial killings of the innocent Kashmiris and the unabated violations of human rights by the Indian occupying forces in the held state.

This year, too, Kashmiris are observing the Indian republic day as black day as the hardliner PM Modi-led Indian government continues violating all international norms and commitments by scrapping special status of the internationally-acknowledged disputed status of the Jammu Kashmir. It may be mentioned here that the article 370 and article 35-A of India’s constitution were revoked on August 5, 2019 after which at least one million military and para military troops were deployed in Indian-occupied Jammu Kashmir.

The black day is also aimed at apprising the world community of the continued hostile attitude of India denying Kashmiris their legitimate right to self determination and deviating all international norms escaping from the peaceful solution of the much delayed Kashmir issue.

In Azad Jammu & Kashmir protest rallies and demonstrations against illegal Indian occupation will be the hallmark of the black day in all ten districts of the liberated territory.

Major rally to observe the Indian Republic Day will be held in Muzaffarabad in which AJK leaders of various political parties including those in the AJK Parliament will participate.

The day will also mark complete solidarity with the freedom-loving people of Indian occupied Jammu Kashmir in their just and principled struggle for freedom and for the achievement of their legitimate right to self determination.

The protest rallies are scheduled to be arranged by various social, political and public representative organizations from all spheres of life including lawyers, journalists, members of the business community, laborers, students, women and social and political workers.

In Mirpur, a protest rally will be held at Shaheed Chowk followed by a big procession of people belonging to all segments of the civil society. The city elders representing various segments of the civil society will also highlight the importance of early peaceful settlement of the Kashmir problem besides expressing concerns about India and its unlawful and forced occupation of Jammu Kashmir for the past 75 years.