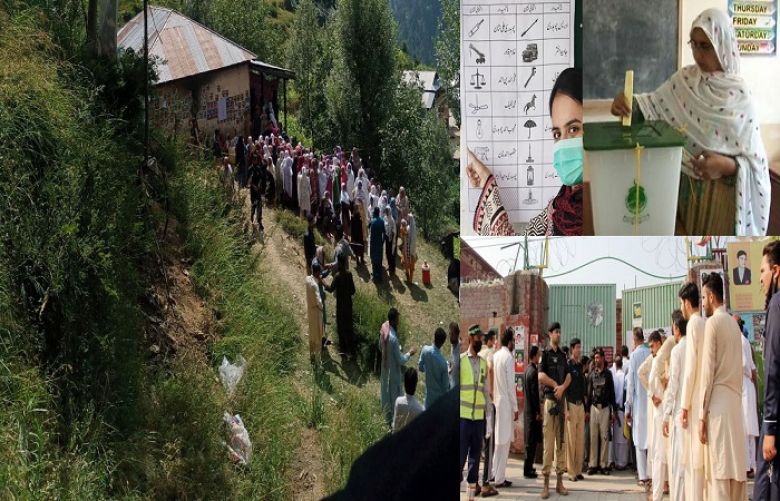 The PTI has emerged victorious in the elections to the Azad Jammu and Kashmir Legislative Assembly, winning by a simple majority, according to unofficial, preliminary results. The party will consequently form a government in the region.

Although results of one constituency is pending, unofficial results showed PTI in the lead with 25 seats, PPP in second place with 11 and PML-N in third place with six seats.

Both the Jammu and Kashmir People’s Party (JKPP) and the All Jammu and Kashmir Muslim Conference (AJKMC) have also won one seat each.
Party Positions
Seats won by each party so far, based on provisional, unofficial data. Total 45 seats are up for grabs.

Polling for the Azad Jammu and Kashmir Legislative Assembly has ended and counting of votes is currently underway.

Unofficial and unconfirmed results of a large number of Azad Jammu and Kashmir Legislative Assembly seats have been received as more are pouring in.

The polling started at 8 am and continued till 5 pm without any break. Over 40 thousand security personals including PAK Army, FC, Rangers & Police performed duties to ensure peaceful polling.

LA-2 Mirpur unofficial results
PTI’s Zafar Anwar is in the lead with 136 votes. PPP’s Qasim Majeed is in second place with 87 votes.

LA-3 Mirpur III unofficial results
PTI’s Sultan Mehmood Chaudhry is leading with 1539 votes while PML-N’s Chaudhry Muhammad Saeed is in second place with 1479 votes, according to unofficial and unconfirmed results.

LA-28 Muzaffarabad
Unofficial results PTI candidate Chaudhry Shehzad is in the lead in this constituency with 226 votes while PML-N’s Murtaza Gillani is behind with 50 votes.

LA-40 Kashmir Valley-1
As per unofficial results, PPP candidate Amir Abdul Ghaffar leading with 238 votes and PTI is behind with 111 votes.

A total of 32 political parties are contesting the AJK elections 2021 and hundreds of independent candidates are also vying in all the 45 electoral constituencies including 33 in AJK districts and 12 meant of Jammu and Kashmir refugees settled in various parts of Pakistan.

The remaining 8 seats are reserved out of which five are for women, and one each for overseas Kashmiris, technocrats and religious scholars.

Eight people were injured after a scuffle between two workers of political parties outside a polling station in Bagh.

The scuffle took place in a polling station set up for the constituency LA-15.

Here is the list of candidates contesting the polls:

LA-3 Mirpur: A neck and neck contest is expected between PTI’s Sultan Mehmood Chaudhary vs PML-N’s Chaudhary Muhammad Saeed. Barrister Sultan Mahmood Chaudhry, who is leading the party in the region, is the strong candidate to head the next government.

LA-21 Poonch & Sudhnuti-4: PTI has not fielded any candidate in this constituency, while PML-N has fielded Tahir Anwar Khan and PPP is backing Sardar Muhammad Yaqoob.

LA-45 Kashmir Valley-6: PTI has fielded Abdul Majid Khan, while PML-N and the PPP have not placed any candidate, while Noor Ul Bari is the candidate of JI and Sumiya Sajid Raja is representing MC.