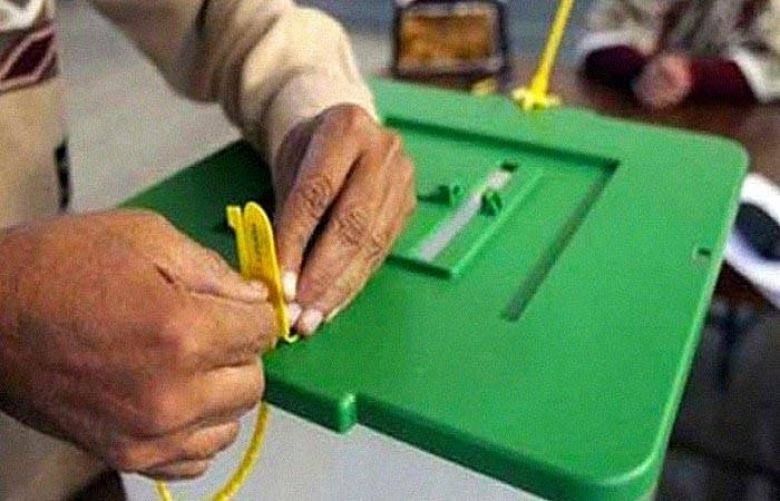 The 12 seats are reserved for Kashmiri refugees in Pakistan, six each for those migrated from the Jammu region and Kashmir Valley.

Meanwhile, LA-43 Valley-IV comprises of some parts of Rawalpindi division, with eight candidats in contest. The number of votes in the seat are 2457.
In the third seat of the Kashmir legislature LA-44 Valley-V 13 candidates competing for the seat with 6340 total votes.

In Peshawar votes being cast for LA-45 constituency of the Kashmir assembly. The police has detained six persons over allegations of disrupting the electoral process.

People’s Party’s Senator Taj Haider has lodged a complaint to the election commission over firing near the polling stations 91, 92, 93, 94, 95 and 101 in the electoral constituency LA-10. “The firing damaged the vehicle of the People’s Party candidate,” Taj Haider said in his complaint.
Votes are also being cast at Karachi, Hyderabad, Ghotki, Sanghar and other areas of Sindh.

Some constituencies of the AJK Assembly are largest in terms of area such as Jammu-1 constituency, whose voters are spread over Punjab, Sindh, and Balochistan provinces, involving 48 districts.
The voters of another constituency reserved for refugees from Kashmir Valley are scattered around 27 districts of Sindh and Balochistan.

According to the Election Commission, 5129 polling stations have been established for 3.2 million registered voters for the AJK election, out of which 826 have been declared most sensitive and 1209 as sensitive.

Polling that started at 08:00am will continue until 05:00pm without any break while results at the polling stations will be announced after one hour of the conclusion of the polling.

According to data, 701 candidates are contesting for 45 general seats including 12 refugee seats in Pakistan.