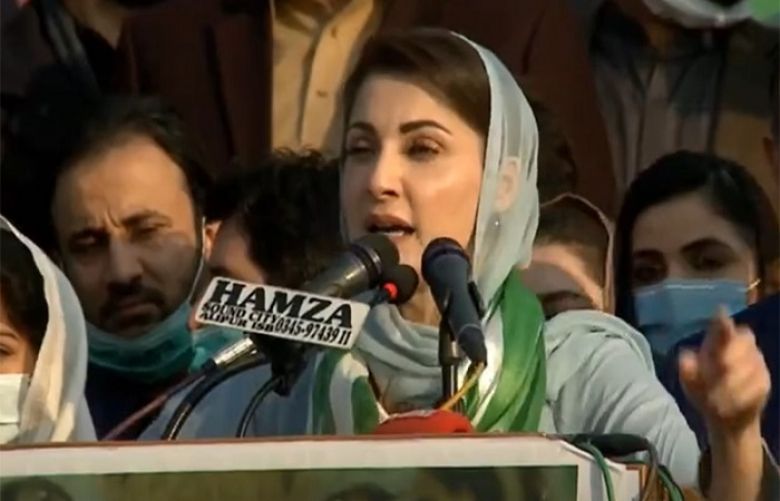 PML-N Vice-President said Friday that when the people of Kashmir needed Prime Minister Imran Khan the most, he was registering cases against Prime Minister Azad Jammu and Kashmir Raja Farooq Haider.

The PML-N vice-president expressed solidarity with the Kashmiris during Pakistan Democratic Movement (PDM)'s Kashmir solidarity jalsa, where she also lashed out at the incumbent government over its "failed policies".

"The election in Kashmir is coming soon — and the people demand that this 'fake' prime minister return us the Kashmir that was before August 5, 2019, or else resign."

The PML-N leader said that when the people of Kashmir needed the incumbent prime minister, he was busy getting votes in his bid to gain seats in the Senate.

"It is unfortunate that whenever the fall of Kashmir is discussed, Imran Khan is also mentioned," she said, asking the prime minister what message did he bring for the people of Kashmir today.

"Did you bring the message for them that you had failed in your fight for them?"

Maryam, speaking about her father, Nawaz Sharif's tenure, said that the country was on its way to "prosperity and development" during his government.

The PML-N vice-president said that whenever a weak government formed, it led to a "weaker Pakistan". "One after the other, people are removed [from office]."

Maryam said that had Nawaz been given more time, the Kashmir dispute "would have resolved" as for the "first time an Indian prime minister had admitted that there should be a solution to the conflict."

"No matter what the conditions are, we will always stand with Kashmir," Maryam said, concluding her address to the gathering.

Meanwhile, addressing the gathering, PDM chief Maulana Fazlur Rehman said that the "forces, trying to separate Kashmiris from Pakistan would be cursed, upon in the future." Paying tribute, he said that Kashmiri forefathers had decided to side with Pakistan, while the current generations were also following suit.

"Till there was an elected government in Pakistan, no Modi dared to revoke Indian Occupied Jammu and Kashmir's special status and make it an Indian province," Fazl said.

Today, Imran Khan and his lobby are mulling "Kashmir's divide" and due to their consideration, Modi, taking advantage of the situation, took this step, Fazl claimed.

Using the platform to remind the people of PM Imran Khan's statements, Fazl said: "He was the one who wanted Modi to win. He is also the first man, who before coming into power, presented a formula to divide Kashmir into three parts."

'History will remember his answer to Kashmiris'

Moving forward, PPP Chairman Bilawal Bhutto Zardari said it was a "tragedy" for Pakistan — the country that saw the likes of Zulfiqar Ali Bhutto and Benazir Bhutto as premiers — now has a "puppet" and "selected" prime minister.

"History will remember, that when there were genocide conditions in Kashmir when Kashmir was attacked when the entire region was turned into a jail, our prime minister, on the floor of the National Assembly, said that 'what can I do?"

Bilawal said that such a prime minister imposes a threat to Pakistanis and Kashmiris' freedom alike. Only "an elected representative and democracy in the country" could respond to Modi — not fascism.

Lashing out at the prime minister, he said that the premier had claimed of becoming Kashmiris' ambassador, however, for now, "he was just Kulbhushan Jadhav's ambassador".

"He keeps reiterating that he won't give an NRO to others, however, he is trying to give an NRO to Kulbhushan Jadhav — and that too without informing the National Assembly, through an Ordinance."

Commending the Pakistan Air force, he said that our brave pilots shot down the enemy's airplane, but our prime minister sends back the prisoners of war after serving them tea.

Bilawal said that if the Kashmiris were left to decide about their future, they would have selected to be free. "Hamara nara tumhara nara, rai shumari, rai shumari — our chant, your chant, election, election."

"Kashmiris have been fighting for their freedom throughout their lives, and now, they will not permit the 'selected' to curb their freedom," Bilawal said.