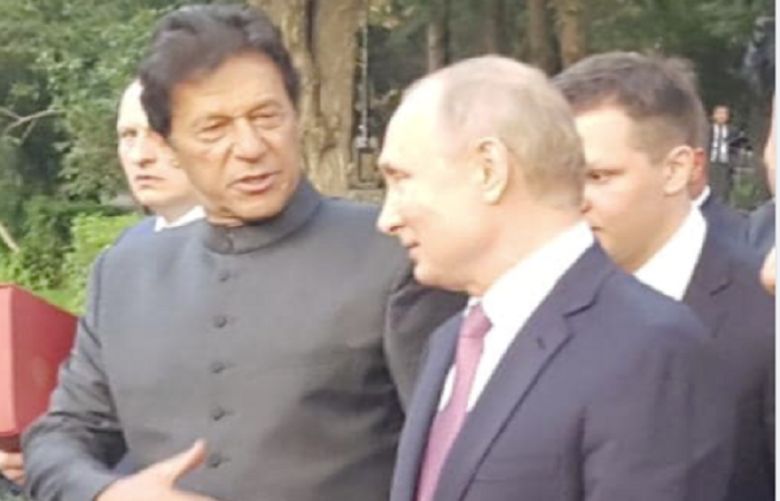 Prime Minister Imran Khan on Thursday held an informal meeting with Russian President Vladimir Putin during a dinner hosted by Kyrgyzstan president in honour of heads of the Shanghai Cooperation Organisation (SCO).

PM Khan on Thursday arrived in Kyrgyzstan to attend the 19th Meeting of the Council of the Heads of State (CHS) of the Shanghai Cooperation Organisation (SCO) being held in the capital Bishkek.

During the dinner hosted by Kyrgyzstan President Sooronbay Jeenbekov, the Pakistan premier and President Putin shook hands and inquired well-being of each other, according to sources.

They said that PM Khan and his Indian counterpart Narendra Modi entered the hall room together, but did not greet each other.

The prime minister, however, shook hands with heads of other states, the sources said, adding that Khan and Modi sat in different corners of the hall room.

The dinner also had arrangement of cultural programs and music of member states, they added.

Earlier upon arrival in Bishkek, Khan was received by Mukhammedkalyi Abylgaziev, Prime Minister of Kyrgyzstan, and Kyrgyz Minister for Health Kosmosbek Sarievich Cholponbaev. Kyrgyz President Sooronbay Jeenbekov, who will chair the CHS meeting, had extended the invitation to the prime minister to attend the two-day summit.

According to details of the prime minister's visit, a number of decisions will be approved by the leaders along with the signing of agreements to intensify cooperation in diverse fields.

The prime minister will have bilateral interaction with other participating leaders on the sidelines, including with Russian President Putin.

The leaders of SCO member and observer states, as well as representatives of important international organisations, will attend the meeting.

Since becoming a member of SCO in 2017, Pakistan has been actively participating at all levels in various SCO mechanisms including foreign affairs, defence, national security, economy and trade, science and technology and innovation, youth and women empowerment, tourism and media.

Last month, Foreign Minister Shah Mehmood Qureshi attended the SCO Council of Foreign Ministers Meeting in Bishkek, which finalised the documents and decisions to be signed by the SCO leaders during the Council of the Heads of State meeting.

The Council of Heads of State is the highest forum of SCO which considers and defines strategy, prospects and priorities of the organisation.