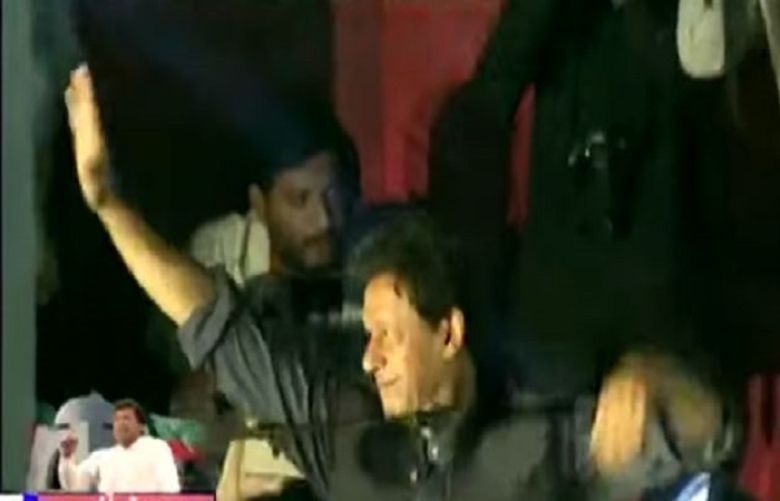 PTI chairman Imran Khan while addressing his party's public gathering at Karachi's Bagh-e-Jinnah once again claimed that a conspiracy was hatched to oust him.

”Conspiracy not interference”, he told a charged crowd.

He said a corrupt person has been imposed on Pakistanis by foreign powers. He said he will not accept this at any cost.

In his address, Imran Khan thanked the people of Karachi to come out for the gathering. He informed the charged crowd that the problem is about the country's future.

"A major international conspiracy was carried out against this country," said Imran. He added that he was not against any country and stood with humanity.

Today’s jalsa is one of the many public gatherings planned by the PTI as they ramp up the political temperature to demand early elections after the ouster of former prime minister Imran Khan through a no-confidence motion.

While some PTI leaders are in Karachi ready to welcome Imran Khan other prominent leaders including Hammad Azhar, and Shafqat Mehmood are currently at Lahore’s Liberty Chowk where PTI supporters have come out on the call of Khan.

It is worth mentioning that when Imran Khan landed at Karachi airport he complained of severe headache and asked for medicine from PTI leader Imran Ismail.

Khan arrived in a charter plane and was received by Ismail, former National Assembly Speaker Asad Qaiser, among other leaders.

According to reports, Khan went to the governor house from the airport where he will chair a party meeting after which he is scheduled to reach Bagh--Jinnah to address the people of Karachi.

“My request to all those attending our jalsa in Karachi is to carry our Pakistan flag as this is now a fight for Pakistan's sovereignty [and] haqeeqi (real) democracy, [and] against US-instigated regime change, supported by local Mir Jafars,” he wrote on Twitter.

Preparations for Karachi public gathering had began few days ago after Imran Khan had announced that he would be visiting the city.

During the public gathering, a trussing fell in Karachi injuring a large number of PTI supporters present at the venue.

The light stand at Bagh-e-Jinnah ground collapsed and several people were injured, videos circulating on social media show that people had climbed the trussing due to which that stand fell.