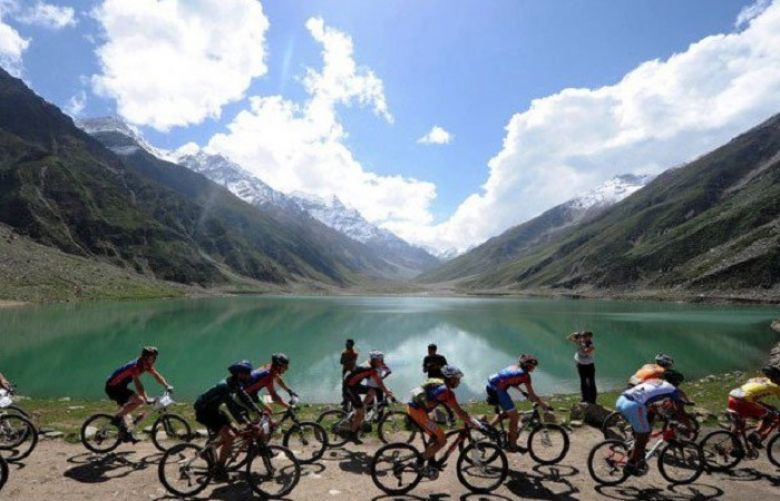 It is World Tourism Day today. This year the celebrations focus on how sustainable tourism can contribute to development. The day has been designated by the United Nations (UN) to highlight the tourism contribution to some of the most pressing challenges that the society faces today.

Over the past six decades, tourism has experienced enormous expansion and diversification, as one of the fastest growing and most important economic sectors in the world, according to the UN.

The international tourist arrivals worldwide grew from 25 million in 1950 to nearly 1.2 billion in 2015. Similarly, international tourism revenues earned by destinations around the world grew from $2 billion in 1950 to $1260 trillion in 2015, it says. The sector represents an estimated 10 per cent of the world’s GDP and one in 10 jobs globally. It is also projected that tourism will continue to grow at an average of 3.3 per cent annually until 2030.

Pakistan must also market itself as a tourism destination. However, it needs soul searching to counter challenges the industry has been facing due to sheer negligence and how to meet them.

With less than a million foreign tourists visiting Pakistan on an average, the country has been able to improve its ranking by one point in 2017 – currently at 124 out of 136 countries –in the Travel and Tourism Competitiveness Index (TTCI) 2017 released by the World Economic Forum (WEF). Earlier in 2015, the country was ranked at 125 among 141 countries.

The TTCI measures the set of factors and policies that enable the sustainable development of the Travel and Tourism (T&T) sector for a long-term sustainability in their national growth and development.

As per the performance indicator, Pakistan received 965,498 international tourists and $317 million as international tourism inbound receipts. The estimated average receipts per arrival are $328.3 million whereas the total receipt of T&T industry has been amounted to $7,362.0 million, contributing a share of 2.8 per cent to the gross domestic product (GDP).

‘Pakistan will soon be among top tourist destinations of the world’

The report also pointed out that Pakistan’s worst performance was visa requirements where it ranked at 135 out of 136 countries. The government’s prioritisation of T&T industry was placed at 132, while the sustainability of T&T industry’s development found the ranking of 128.

Marketing and branding success to attract tourists was positioned at 125; tourism infrastructure quality was placed at 123, while hotel rooms gained a ranking of 129. For safety, security and environmental sustainability, the country was placed at 133.

However, consoling part in the report was spots of tourists’ attraction. Pakistan has some 86 world heritage natural sites, 36 world heritage cultural sites as it stood 127 for s attractiveness of natural assets. Despite improvements in the ranking, the performance score remained unchanged at 2.9 as it was in the 2015 report.

The TTCI report also indicated that the T&T’s direct contribution to Pakistan’s GDP constitutes 2.8 of the total GDP. The government predicts that tourism will contribute ₨1 trillion ($9.5billion) to the country’s economy by 2025.

Tourism’s potential in Pakistan is huge with a real boost to the local business industry. From beautiful mountains to lush tropical landscape in addition to a host of world heritage sites, Pakistan needs to improve its tourism options. There is also a need to conserve the natural landscape, wildlife and cultural heritage, as they need maintenance without which the places will fade out.

However, efforts to attract international tourists have been marred by threats of terrorism, ailing administration and visa policy.

Pakistan could be a serious destination of interest for the international travellers but as a growing industry, tourism has always been neglected due to one or the other reason. Moreover, years of inattention and fissures between administrative machinery and policymaking have also affected the industry. The sector suffered damages in the absence of a comprehensive policy following its decentralisation among the provinces.

Besides, the Pakistan Tourism Development Corporation’s (PTDC) devolution has brought almost all integral elements of tourism to a standstill. One of the basic tools that could help achieving international tourist target is the country’s visa policy. At a time when international travel is becoming easier and countries are opening their doors to more and more tourists, Pakistan is lagging behind due to a faulty visa policy. But, the PTDC has planned to encourage religious tourists and to work with the embassies for introducing healthy visa conditions.

Clash of interests within the administrative system has also ceased the sector from growing successfully. The PTDC MD holds decentralisation of tourism affair within the provinces responsible for its under-performing status.

“Tourism is a federal subject in every country around the world but in Pakistan, it has been devolved to the provinces. The PTDC’s devolution is illegal and against country’s company act, which he has challenged in the court of law and awaiting a decision to stop the notification this month,” he added.

“The Sindh Tourism Development Corporation (STDC) is working without a policy. The draft was sent for approval four years ago. But it has been lying unattended due to sheer negligence of the STDC MD, Sindh secretary and the minister,” said STDC General Manager Murtaza Daudpoto.

Famous travel documentary filmmaker Wajahat Malik, who has also travelled extensively through the mountains of Pakistan, wipes out the terrorism factor saying that unnecessary quizzing on the valley has distracted tourists from visiting Pakistan.

“We should create a soft image of the country and invite tourists instead of pushing them out of the country,” he says and stresses that there is also a need to educate domestic tourists to save heritage sites and serene places from damage.

Describing Pakistan’s scenic beauty, Gilgit-Baltistan Tourism Development Corporation Deputy Director Safiullah said, “Pakistan is rich in natural beauty with mountains, beach, lakes, valleys, waterfalls and spectacular hill stations. It is also home to many tourist spots including heritage sites, monuments, cultural locations and development venues to attract both foreign and domestic tourists. We only need to create an enabling environment for them.”

Pakistan’s geographical and ethnic diversity has much to offer to both domestic and international tourists. We should not overlook our natural assets and must be more welcoming. Just as the government is keen to bring cricket back in Pakistan, events and opportunities should be created that could be heralded as the return of tourism in the country once again.

Shazia Tasneem is a journalist, critic and a rights activist. Her work has appeared in leading Pakistani publications.