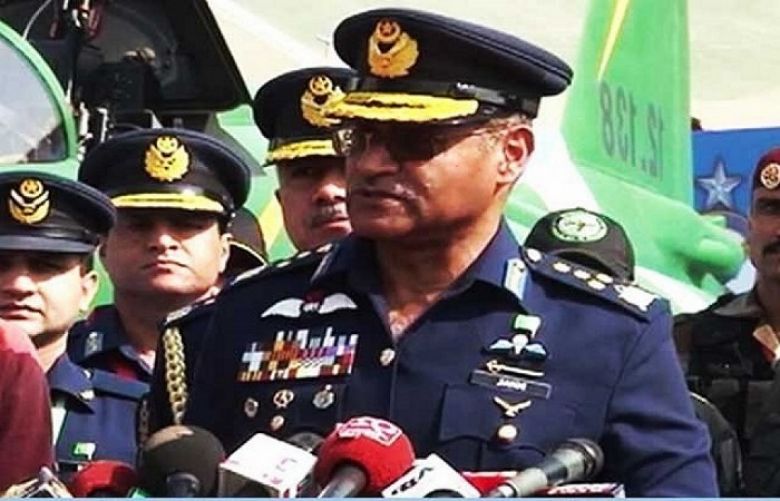 Our response to any Indian aggression will be remembered by their coming generations.

This was stated on Wednesday after Chief of Air Staff Air Chief Marshal Sohail Aman visited the Qadri Airbase in Skardu where war exercises by fighter jet squadrons are being held.

All forward operating bases of the Pakistan Air Force (PAF) have been made operational in response to Indian ‘threats’.

The air chief also took part in the exercises, flying a PAF Mirage jet himself.

Talking to the media at the airbase, the air chief said no situation is difficult for the PAF. "The nation should not worry about the enemy’s statements," he said, adding that we are peace loving people but are ready to face all kinds of challenges.

Terming the JF-17 fighter jet as the ‘pride of Pakistan’, he said its most significant aspect is that it is made in Pakistan.

On May 20, Indian Air Chief Marshal B S Dhanoa wrote a personal letter to each officer of the Indian Air Force (IAF), asking them to be prepared for operations, with the present scenario, at a very short notice.

The Indian Express reported that the letter — signed and sent to the IAF officers on March 30 — covers a range of issues, especially those in the conflict-ridden state of Jammu and Kashmir.

Nearly 12,000 officers of the IAF have received the letter, which was written by Dhanoa after he assumed the role of IAF chief three months ago, the report adds.

“In the present scenario, there is an ever persistent sub-conventional threat. Therefore, we need to be prepared for operations with our present holdings, at a very short notice. Training needs to be focused towards this,” states the letter.

A strong, well-equipped navy is required to deal with the regional challenges facing the country, stated Chief of Pakistan Navy Admiral Muhammad Zakaullah on Wednesday.

He was addressing the 46th staff course convocation at the Naval War College in Lahore where cadets from several other countries were also in attendance.

"The navy will utilise all its resources to secure our coastal border," said Admiral Zakaullah.

The naval chief stated that the latest technologies will be brought to use to strengthen the navy.

He added that Pakistan is a peace-loving country.