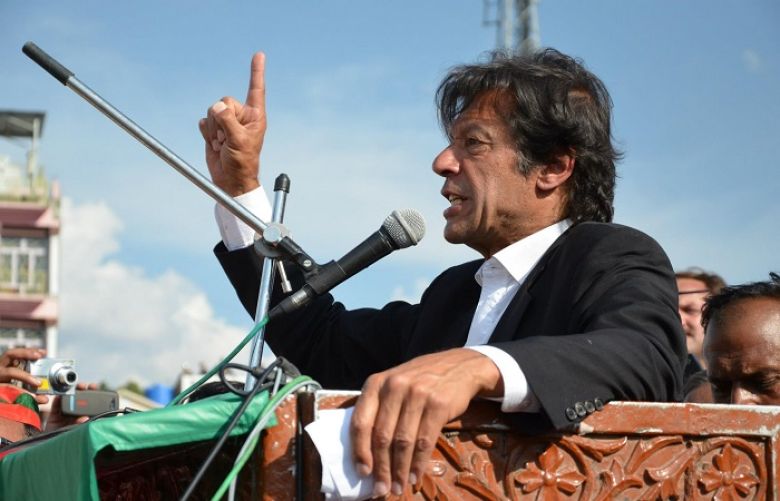 Pakistan Tehreek-i-Insaf Chairman on Sunday continued his tirade against the government, accusing Prime Minister Nawaz Sharif of nominating his own 'umpire' for the upcoming elections in Gilgit-Baltistan (GB) region.

Speaking to reporters, Khan warned the government that his party will challenge it in court and take to the streets in case the polls were rigged.

Wearing a traditional pakol indigenous to the region, the PTI chairman said that the government had maintained 12 cabinet ministers — all of whom were PML-N members — in Gilgit-Baltistan's caretaker setup instead of three cabinet members.

He added that the chief election commissioner was also a Pakistan Muslim League - Nawaz (PML-N) activist.

President of Pakistan Mamnoon Hussain had appointed Federal Minister for Kashmir Affairs Chaudhry Mohammad Barjees Tahir as governor of Gilgit-Baltistan (GB), in a move that stired up controversy in the run-up to the coming council elections.

Flanked by former Azad Jammu Kashmir (AJK) Prime Minister Barrister Sultan Mehmood, who formally joined the PTI on Thursday, Khan told reporters that he was presenting the facts well before the election unlike in the general election. This time his party would preemptively resist poll-rigging in Gilgit Baltistan, he promised.

He cited the examples of Balochistan and Bangladesh with regards to deprivation of rights and made four demands with regard to Gilgit-Baltistan whose people, according to Khan, have been rendered as second-class citizens.

He asked for the rights of the people of Gilgit-Baltistan so as to not let the people '"feel deprived like the people of Azad Jammu Kashmir". He also demanded that free and fair elections.

An opportunity should be given to genuine representatives to rise up, Khan added.

Fourthly he asked for devolution and decentralisation of power and independence. "They should be able to run their own affairs. The region is heading backwards and should be given a chance to develop and progress.

Talking about the upcoming Senate elections Khan said that people belonging to a particular province should not be able to contest Senate polls from another province.

Why should the Senate polls be held under a secret ballot when we all know it gives rise to the chance of horse-trading.

He also demanded of all political parties to amend the laws to enable direct elections for the Senate seats.

The PTI chairman gave the example of the Pakistan Peoples Party which has only five seats in the Khyber Pakhtunkhwa assembly and is contesting two candidates adding that each Senate seat required the votes of at least seven to eight MPA's.

Elaborating on his point he said the only way PPP can succeed in winning those two senate seat is through bribery as in his view there was no other way around it.

He added that "One of our MPA's supported a candidate and we have asked the Speaker of Khyber Pakhtunkhwa Assembly to take action against him and will take further action if charges of bribery are proved against him."

"What services will a Senator offer to the country if he comes into position though bribery," the PTI Chairman questioned.