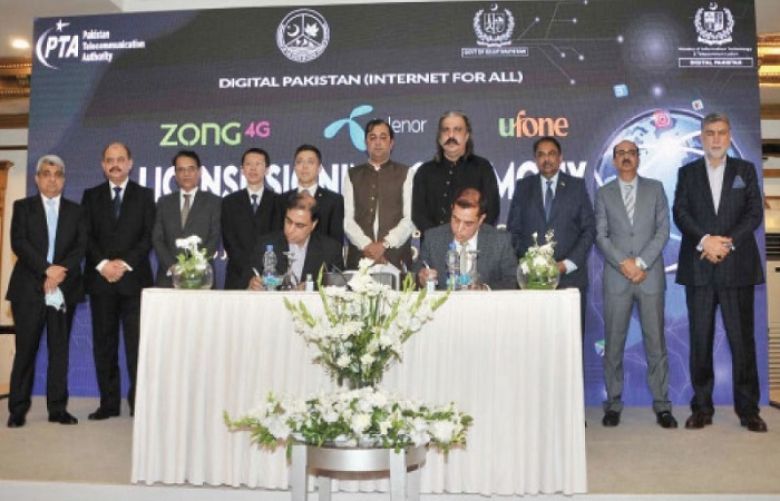 All three telecommunication service providers are successful bidders in the first ever auction of additional spectrum for GB and AJK.

Representatives of all three mobile companies have demanded of the PTA and the Ministry of Information and Technology to ensure that the required backend facilities are provided in the region for fast and reliable 4G internet service.

Addressing the ceremony, Khalid Khursheed, the GB chief minister, said lack of political will had delayed the launch of 3G and 4G services in the region despite the fact that these services were launched in the rest of Pakistan in 2014.

“We heard everywhere that the Special Communications Organisation (SCO) was resisting the launch of 3G and 4G in GB and the AJK. When we asked them about it, the answer was in the negative and we were told that the PTA was not interested but that too was incorrect,” Mr Khursheed said and lauded the efforts of Prime Minister Imran Khan and IT Minister Syed Aminul Haq for initiating the auction of spectrum for the region.

“Not only visiting tourists and the business community will benefit from the launch of 3G/4G services in GB and AJK but the people will be able to avail e-education, e-health, e-learning, e-commerce etc., which will eventually uplift the overall economic and social standards,” the CM added.

The governments of GB and AJK will also get a total of up to Rs7 billion in terms of royalty from the auction proceeds that will be divided between the two regions at the ratio of 40:60, respectively, based on their population.

Meanwhile, state-owned telecom service in the region, SCO, established in 1976 to connect the remote region with the rest of the country has been granted 20 mega hertz of spectrum free of cost as all its earnings are deposited in the divisible pool.

While the SCO officially has exclusive rights to operate telecom services in the region, all private sector mobile companies were allowed to operate in GB and AJK after the devastating 2004 earthquake.

Kamal Ahmed, chief cooperate affairs officer Telenor Pakistan, which has the highest market share in the region called upon the PTA to establish optical fibre network in the region if the benefits of connectivity have to be achieved.

Meanwhile, senior officials of PTA said customer protection clauses were added to the agreement of additional spectrum, which included enhancing internet speed to 1 megabit per second (mbps) for 3G and 4mbps for the 4G service.

Besides, additional spectrum will be distributed equally in rural and urban areas of GB and AJK. PTA has already granted 45 licences to various companies for establishing optical fibres and other services in the region.