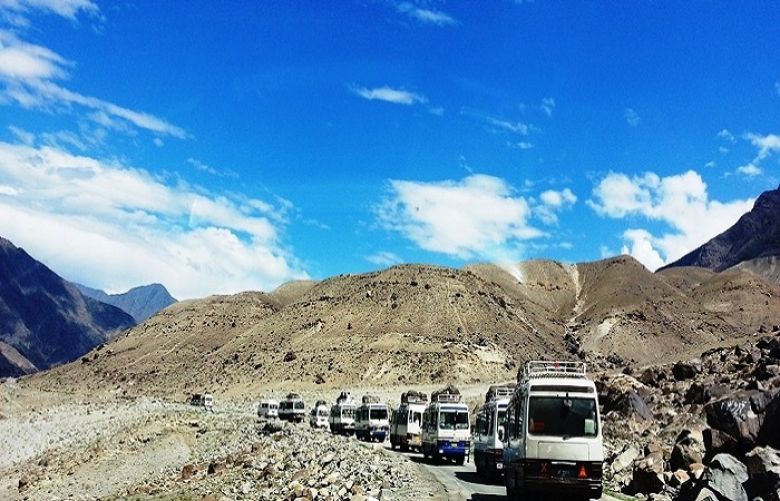 File Photo After 3 days of efforts, KKH opened for all kinds of traffic

Following three days of endeavors, the Karakoram Highway has been opened for a wide range of traffic, reported the Inter Services Public Relations (ISPR) in a proclamation.

The Military media wing said that the Frontier Works Organization (FWO) worked resolutely day and night to open the thruway.

"Regardless of terrible climate and troublesome conditions, FWO groups worked day and night to open the street for traffic," said the ISPR.

The ISPR said that the expressway got hindered on Tuesday because of the downpours in Gilgit Baltistan and was shut down at 20 focuses from Tatta Pani to Raikot.

An enormous number of travelers and local people had been abandoned because of the conclusion of the Karakoram Highway following avalanches in Gilgit-Baltistan.

Large equipment was introduced on the two sides of the Karakoram to clear the roadway, yet there were hardships in restoration work because of avalanches.

The GB Home Department had said work on opening the hindered segments of the Karakoram Highway began early Thursday morning.

They said the Disaster Management Authority and the FWO worked day and night to reestablish the Gilgit-Astore Road and a wide range of traffic on the expressway had been reestablished by Thursday evening.

The GB home division had before said the street will be returned soon in case there is no more downpour or avalanches, with FWO, NHA and area officials administering recovery work on the spot.

Travelers were advised to stand by in Chilas till the streets returned.