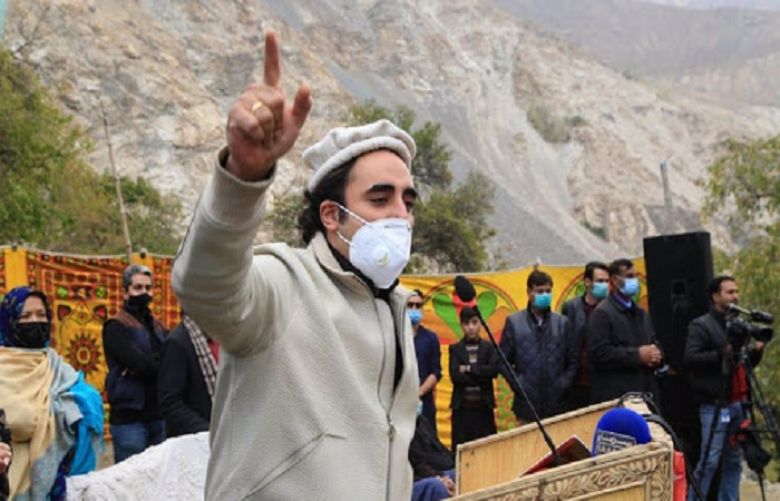 File Photo PPP not to disregard individuals of Gilgit-Baltistan: Bilawal

Pakistan Peoples Party (PPP) Chairman Bilawal Bhutto Zardari on Sunday said that his party will not leave the people of Gilgit-Baltistan (GB) alone.

Bilawal Bhutto Zardari said that PPP will provide the masses their constitutional rights. He maintained that Gilgit-Baltistan will be given provincial status and the people will get the right to rule soon.

Responding to a question, Bilawal said that conspiracies to keep PPP out of the polling process will not succeed. He maintained that rigging will not be allowed in the polls. Bilawal claimed that PPP will win the elections in Gilgit-Baltistan.

Earlier on October 26, Pakistan Peoples Party Chairman Bilawal Bhutto Zardari had claimed that only his party could resolve the problems of the masses.

Addressing a public meeting in Gilgit, Bilawal Bhutto had said that only PPP possessed the capability to resolve the public issue. He had maintained that his party will steer the country out of economic crisis.

The PPP chairman had urged the masses to support PPP in the forthcoming elections. PPP, in its tenure, had launched a historic ISP program to curb inflation and had increased government employees’ salaries by 100 per cent, he had added.