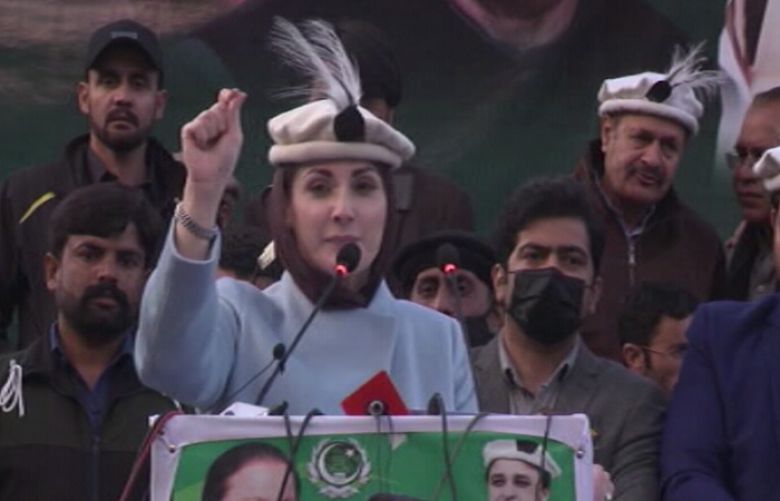 With a little over a week remaining for the Gilgit-Baltistan Assembly elections, PML-N's Maryam Nawaz arrived in Skardu on Thursday to kick-off a seven-day election campaign

Later addressing a rally in Ganche district adorned in the region's traditional cap with feathers, Maryam began her speech by thanking the people for their passion.

"The way you have come out today to attend the rally, do the same on the day of the polls and vote for the PML-N," she said, vowing to the fight for the people's rights. "Without GB, Pakistan is like a body without blood."

She also called upon the people to refrain from voting for candidates that change their loyalties. "Don't vote for these turncoats," she said.

Maryam also lashed out at Prime Minister Imran Khan, alleging that the premier was taking credit for projects PML-N supremo Nawaz Sharif had laid the groundwork for.

"A few days ago, a jackal [geedar] came to the region [...] he didn't even bother to sit with the people and address them. He is scared because he can't go among the people," she said, purportedly referring to the prime minister's recent trip to GB.

"Vote thieves have begun circling GB. Whenever they see PML-N or Nawaz winning, they start carrying out rigging. They have taken away nine of our candidates. You can take away our candidates, but you cannot buy the people of GB," she said.

Meanwhile, Nawaz — who is currently abroad seeking medical treatment — said that the enthusiasm of the people of Skardu was "admirable".

"'Respect the vote' is now the voice of the entire nation right up to the extreme borders of Pakistan," he said.

Electioneering in the region has picked up pace with only a few days remaining for the GB Assembly election, scheduled to be held on November 15 in 24 constituencies.

Maryam arrived in the region earlier today for a week-long election campaign. According to the party, she will address a public meeting in Skardu on Friday and in Dambudas on Saturday.

She will also address public gatherings in Ghokooch, Astor and Chilas on November 8, 10 and 11, respectively. During her visit, Maryam will be briefed on the development projects launched by the party. She will also meet party ticket-holders, officials, workers and supporters.

PPP Chairman Bilawal Bhutto-Zardari has been in GB for the past several days, vowing to stay in the region until the PPP government wins elections there and forms a government. He has also insisted that the people of GB will overwhelmingly vote against the candidates of the "puppet" PTI.

Meanwhile, ruling PTI ministers have also visited the area to rack up support for the November 15 polls.

On Saturday, Minister for Kashmir Affairs and Gilgit-Baltistan Ali Amin Gandapur announced that the federal government had decided to elevate the status of the region to a province.