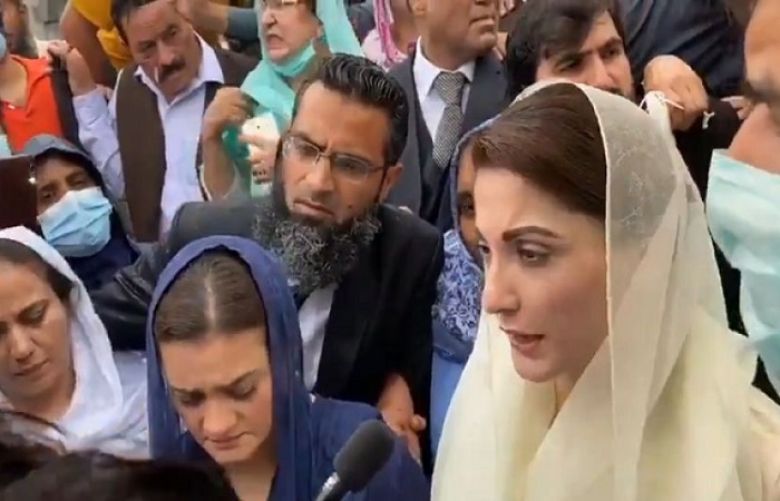 PML-N Vice-President Maryam Nawaz has said her father, former prime minister Nawaz Sharif will return to the country as soon his treatment is completed and his health is out of danger.

Maryam made the remarks after her appearance at the Islamabad High Court (IHC) on Tuesday to attend a hearing of the Avenfield Apartments review petition.

“Everyone is equal in the eyes of the law,” Maryam said, adding that they [the Sharif family] had been buried under accusations.

“Imran Khan used to say if Nawaz went abroad there would no accountability," she said, adding that the case against her father should have been dismissed after the Arshad Malik case decision by the court.

Earlier on arrival at the court, Maryam — speaking about her father's treatment in London — had said that no one wants to be away from his/her home country at such an age. "Mian Sahab's treatment is going on, it got delayed due to the coronavirus," she said. Regarding the upcoming APC, she said that "I don't think he [Nawaz] will tell us not to attend it".

Maryam had added that Nawaz was 'restless' to return to Pakistan. However, the PML-N leader said she told him not to do so until his treatment was going on.

Referring to the incumbent government, she said that it was reaping what it had sown. "I thought this government would take five years to give such a poor performance. The damage they were expected to do in five years has been done only in two years' time," she added.

On the subject of the All Parties Conference (APC), the PML-N leader had said that it was the need of the hour for the opposition to gather on the same page. "You will know at the APC that everyone is on the same page," she had said.

'Govt reaping what it has sown'

Referring to the incumbent government, she said that it was reaping what it had sown. "I thought this government would take five years to perform such poorly. The damage they were expected to do in five years' time has been done only in two years," she added.

Maryam had briefly stopped at Bara Kahu where a large number of PML-N workers had gathered to welcome her.

Maryam's father, former prime minister Nawaz, had sought exemption from attending the hearing, while Maryam and Safdar had filed a request for adjournment. All three — Nawaz, Maryam and Safdar — are out on bail in the case.

The Avenfield properties reference was one of three filed by the National Accountability Bureau (NAB) the preceding year in light of the Supreme Court's verdict against Nawaz in the Panama Papers case. The reference pertained to the ownership of the Sharif family's apartments at Avenfield House, London.