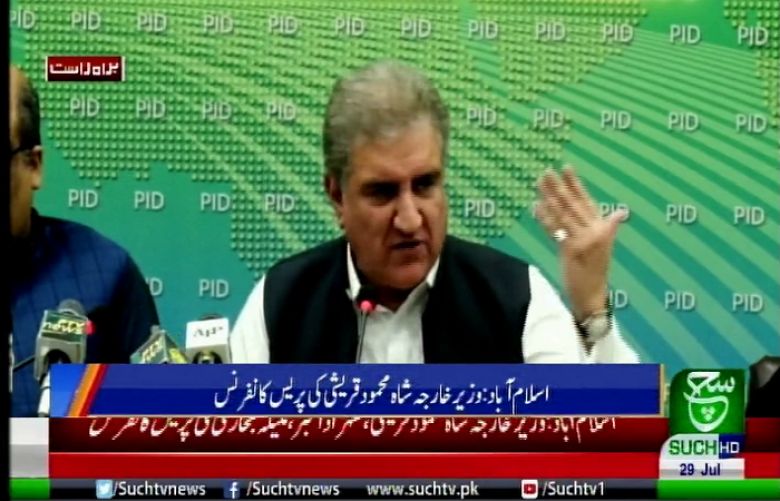 Adviser to Prime Minister on Accountability Shahzad Akbar said on Wednesday that the federal government wanted to pull out the country from Financial Action Task Force (FATF) grey list.

Shahzad Akbar, while addressing a press conference alongside Foreign Minister Shah Mehmood Qureshi and Maleeka Bokhari, questioned the opposition parties whether they wanted to push Pakistan into the blacklist of FATF.
He said that the opposition should share their thoughts with the federal government for what they were seeking to bring a positive change. Akbar clarified that the federal government is ready to hold talks with the opposition, however, they should put aside their personal interests.

The PM’s adviser on accountability criticised that every point of the proposed amendment by the opposition would shut dozens of cases and Prime Minister Imran Khan will never agree on the draft.

He reiterated that the opposition had suggested not to consider the financial irregularity of Rs9.9 million as corruption besides seeking the closure of cases against sugar mafia, Asif Ali Zardari and leaders of Pakistan Muslim League Nawaz (PML-N).

Akbar vowed that the federal government will not make any compromise on the anti-money laundering legislation.

Addressing the press conference, Shah Mehmood Qureshi said that India wanted to drag Pakistan to the blacklist of the anti-money laundering watchdog and it could lead to international sanctions on the country.

“This FATF-related legislation will move us to the white list from grey list,” he said and lamented that opposition was opposing the move and had linked its passage with the approval of its other conditions.

Responding to amendments proposed by the opposition parties in accountability law, he said that accepting their conditions would completely halt the accountability process.

“Why should we fear anyone when we have not availed any benefits?” he responded and said that he was in the opposition ranks during Musharraf tenure but no corruption allegations were levelled against him even at that time.

He rejected any changes in the NAB-related bill for facilitating a certain personality and said that they could not support the proposed changes from the opposition in the accountability law.

He said that they would not make any compromise over the accountability process and it would continue unabated.