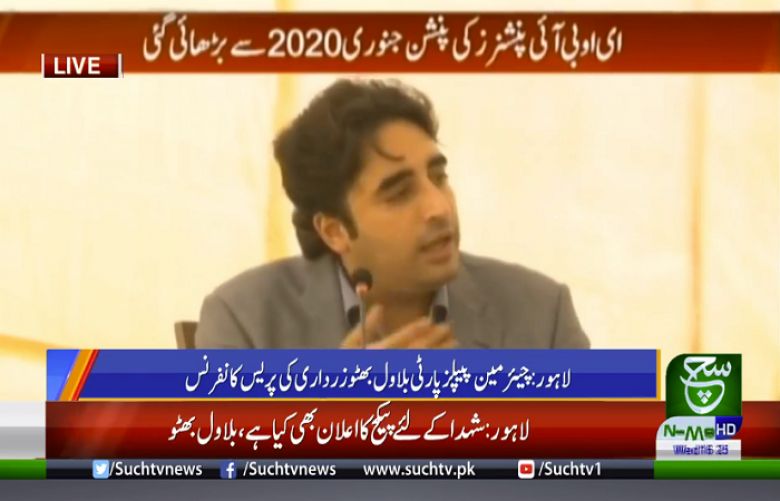 PPP chairperson Bilawal Bhutto-Zardari on Wednesday held the PTI government responsible for the Pakistan International Airlines (PIA) being barred from operating flights to European countries, saying the government wants to sell off the national flag carrier's assets based on "lies".

Addressing a press conference in Lahore, he said PIA's permit to fly to EU countries was suspended because Aviation Minister Ghulam Sarwar Khan had accused its pilots of holding dubious licences "without any evidence".

"The minister whose own degree is fake ... levelled this type of allegation against our pilots without any evidence [leading to] them being banned across the world. No one has caused this type of damage to PIA in history as this government," he said, referring to Khan.

Bilawal said government officials failed to realise that pilots are required to sit an exam and renew their licence every six months and they do not necessarily require a degree to operate flights.

He emphasised that the licence and certification are issued to all pilots by the Civil Aviation Authority.

"I had warned the [government] on the floor of the parliament that if you don't adopt a policy to control the pandemic, you will be isolated like Sweden and some other countries and your citizens won't be allowed into other countries," he said.

The PPP leader accused the government of "telling lies such as this" to privatise PIA by taking advantage of the May 22 air crash in Karachi involving the national airline that killed 98 people.

He said the government wants to sell off PIA's assets to benefit its frontmen including the Roosevelt Hotel owned by the airline in New York, which he said is a profitable property. But even if the government is in favour of privatisation, it cannot sell off PIA in the current economic circumstances, Bilawal added.

He said the government was targeting pilots even though Pakistani pilots are considered some of the best in the world. "Emirates headhunts PIA pilots [while] Imran Khan's government which itself is selected and fake carries out their character assassination," Bilawal said.

PIA's latest troubles began after Aviation Minister Khan last week announced the grounding of 262 airline pilots — including 141 from PIA — who were suspected of dodging their exams.

The revelation caused global concern and on Tuesday, the European Union Air Safety Agency (EASA) suspended PIA's authorisation to operate in the bloc for six months.

This was followed by the United Kingdom Civil Aviation Authority withdrawing the national flag carrier's permit to operate from three of its airports and the United Arab Emirates seeking to verify the credentials of its Pakistani pilots and engineers.

Speaking about the Covid-19 situation in the country, Bilawal said the impression being given by some officials that Pakistan's coronavirus curve is flattening is a "blatant lie".

"Some people who have not read anything about the virus are saying that the curve is flattening; this is a blatant lie," he said while referring to government officials.

He alleged that the PTI government had "sabotaged" efforts to contain the Covid-19 outbreak from day one and had not taken any steps to mitigate the virus's threat.

"The worse is yet to come; the curve would only flatten if you had taken steps to flatten it," he said, adding that Covid-19 cases have risen in the country because the government has not made enough efforts.

Bilawal said Pakistan is grappling with "historical" challenges in the form of the virus outbreak, locusts attacks, a weak economy and monsoon rains but the "instead of making improvements, the PTI is making the situation worse".

He said he had challenged Prime Minister Imran Khan to a debate on Covid-19 and the economy, but the premier was not ready to face him in the parliament and left after delivering his own speech.

"His problem is that he is not ready to become the country's PM, he is glad to be the PM of the PTI and their Facebook and Twitter.

"We need a serious adult who can tackle the serious issues being faced by the country, who can understand what a pandemic is and take steps to deal with it," Bilawal added.