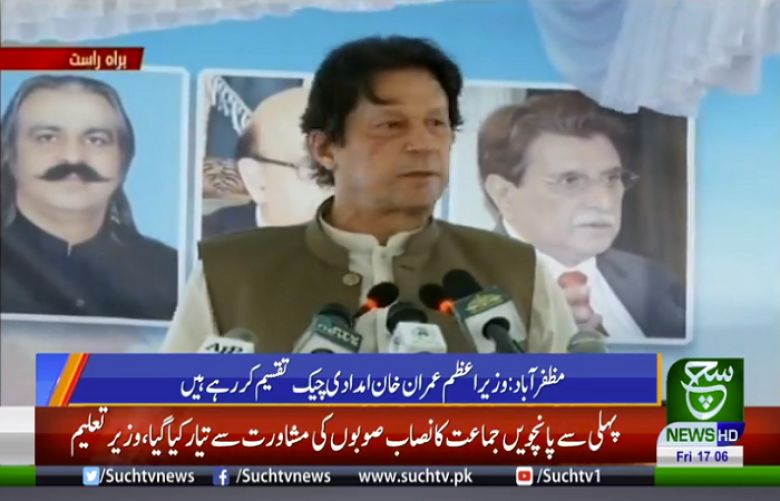 Prime Minister Imran Khan on Friday called Indian Prime Minister Narendra Modi a “psychopath” and "a product of the RSS" while speaking at an event here in the capital of Azad Jammu and Kashmir.

Referring to the International Day in Support of Victims of Torture 2020, PM Imran said the RSS' Hindu extremist Modi government had done injustices in Kashmir.

"Modi murdered Muslims in Gujarat, pushed them out of their homes, and had women raped," he said. "Modi is not a normal man; he's a psychopath and a product of the RSS.

"His party is a product of the RSS and those belonging to the RSS consider Hitler's Nazi Party a role model. What's being done to the Muslims [in India] was done to Jews by Hitler.

"They are heading towards genocide in Kashmir," the prime minister warned, adding that such tyrants were actually cowards.

He said violence was ongoing in Kashmir earlier as well but under the Modi government, children had lost their eyes due to the Indian Army's use of pellet guns, thousands — including 10- and 11-year-old kids — were taken to jails, and mass graves were discovered.

An 800,000-strong army was committing atrocities on some eight million people in Kashmir in a planned and coordinated manner, the PM said. "I had promised to become the ambassador of Kashmir. I told the world about the RSS and its violence."

PM Imran said India was using power to scare and harass the inhabitants of occupied Kashmir and spreading fear and terror in an attempt to intimidate them.

"The Kashmir movement rose again due to their [Indian Army's] aggression and violence. India cannot frighten the Kashmiris," the prime minister said, praying for their strength and patience.

"No power can deter the Kashmiris' passion and resilience. I will bring to the whole world's attention the conditions in occupied Kashmir."

The premier said he had apprised the head of every country he met of the issue of occupied Kashmir and would continue telling the world about it.

"I told heads of state about the RSS' dangerous mindset, of how these extremists believe that people of other faiths are not their equals, that they are a special creation of God, like Hitler spoke of the Aryan 'master race', and that others are second-class citizens.

"They do that with the Christians in India too but they mainly do it to the Muslims. In the end, they will also go for the Sikh community and other lower castes," he said, terming it "the Brahmin thinking", which considered lower castes as untouchables.

"We raised the Kashmir issue in the United Nations when it was the focus of international media," the premier said.

"As we returned from the UN in New York after raising the Kashmir cause in the world, when a certain man started his Azadi March," PM Imran stated, taking a jibe at JUI-F chief Maulana Fazlur Rehman, who had headed a rally towards Islamabad.

"Azadi March intentionally sabotaged the cause of Kashmir as it distracted the media and the people when the Kashmir cause was being raised," the premier said.

PM Imran also underscored that his government would make proper arrangements ahead of August 5 to commemorate the horror and abuse Kashmiris have faced since a year when the Modi-led Indian government scrapped the Muslim-majority region's special status.

"All Pakistanis and Kashmiris — anywhere in the world — will participate in this movement of the world as well as in Pakistan and we will all continue reminding the world of what's happening in Kashmir."

The prime minister also spoke of Muslims being targeted in India, saying "Modi's thinking is the destruction" of that country and that the smart and educated people there had started to realise their PM was taking the nation towards devastation.

PM Imran also talked about the Ehsaas Programme under his PTI-led government, stating that "God has given me the opportunity to help those living with difficulties at the Line of Control (LoC)".

"Assistance will be given to 138,000 families through the Ehsaas Programme," he said, adding that AJK prime minister and president had detailed the challenges they face when India started bombing and people were martyred.

"I'm proud to help such people. Health cards will be given to 1.2 million people in Azad Kashmir," the premier explained, adding that people would be able to get treatment worth up to Rs1 million for free.

"When there's sickness in a daily-wager's house, their family goes below the poverty line because the money they spend on medical treatment upends their budget."

The PM also lamented the lower-than-expected revenue collection due to the coronavirus and related lockdown but said his government had raised the public sector development programme (PSDP) and budget.

"Even in these challenging times, we have increased Kashmir's budget and not reduced it," he explained, adding that the budgets of Azad Jammu and Kashmir, Federally Administered Tribal Area (FATA), Balochistan, and Gilgit-Baltistan would be bumped up.

"We will continue helping the people of Kashmir," he added.