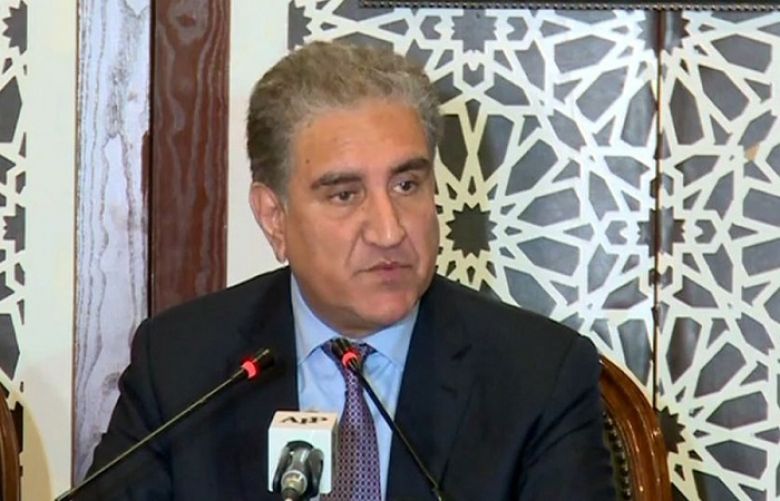 Foreign Minister Shah Mehmood Qureshi on Monday urged the Organisation of Islamic Cooperation (OIC) to step up its efforts to facilitate a lasting solution to the Kashmir issue.

"The oppressed people of India occupied Jammu and Kashmir, now more than ever, count on the OIC and the Muslim ummah.

"The OIC must urge India to rescind its unilateral and illegal actions since August 5, 2019, implement the relevant UNSC resolutions to hold a UN-supervised plebiscite, halt its blatant human rights violations and provide unhindered access to [...] human rights organisations and international media to investigate and report on the situation in the occupied territory."

The foreign minister expressed these views while addressing a virtual meeting meeting of the OIC Contact Group on Jammu and Kashmir. According to Radio Pakistan, the meeting was held at a ministerial level to discuss the worsening situation in the occupied valley.

During today's meeting, the foreign minister also urged the group to lend support for actively raising the issue at international forums.

Qureshi began his speech by stating that the last time the group met was in New York on September 25, 2019.

"Since then, the situation has further aggravated. It is marked by gross and systemic violations of human rights, and an escalating threat to regional peace and security.

"The current Indian leadership remains bent upon perpetuating India’s illegal occupation of Jammu and Kashmir. The 'Hindutva' agenda of the RSS-BJP combine is deliberately targeting defenceless Kashmiris with unspeakable violence to break their will."

He said that Pakistan has consistently been raising the issue with the OIC and the international community about India's "real intentions to change the demographic structure [of the occupied valley] and further disempower and disenfranchise the Kashmiris".

"It is highly reprehensible that while the world community is grappling with the Covid-19 pandemic, India remains busy intensifying its brutalisation of the Kashmiri people."

He maintained that India was seeking to cover up the indigenous struggle of the Kashmiris, by calling it "terrorism" and by blaming Pakistan.

As part of this cover up, India has intensified ceasefire violations along the Line of Control (LoC) and the Working Boundary, he said.

"Since January 1, India has committed 1,440 ceasefire violations [and] has deliberately targeted innocent civilians on the Pakistani side of the LoC, killing 13 and injuring 104, including women and children."

He added that despite India's "belligerent rhetoric and aggressive actions", Pakistan had showed maximum restriant.

"Pakistan does not want another conflict. However, it has the will and the capacity to respond forcefully and effectively, and defend itself resolutely against any act of aggression."

In a statement issued after the meeting, OIC Secretary General Dr Yousef A Al-Othaimeen stressed the group's commitment to finding a peaceful settlement for the Kashmir issue

"At the same time, I call on the international community to strengthen its efforts to assist the people of Kashmir to decisively practice their legitimate rights denied for decades," the secretary general said.

The group also reaffirmed the continued support for the people of occupied Kashmir and called on the United Nations secretary general to urge India to abide by the UN Security Council's (UNSC) resolutions and engage in dialogue.

The group called on India to halt security operations, respect basic human rights, refrain from changing the demographic structure of the occuiped valley, and settle the conflict under the relevant UNSC resolutions, the statement said.

After the meeting, the group issued a statement on recent developments in the region in which it welcomed the efforts made by some member states to mediate between India and Pakistan.

According to a statement from the foreign ministry, Qureshi shared "deep concern over the continuing double lockdown as well as the intensification of [a] military crackdown by Indian occupation forces and attempts to change the demographic structure of the occupied territory by introducing [a] new domicile law".

He also lauded recent statements by the OIC and other international bodies which showed serious concern and urged urgent steps to address the situation in occupied Kashmir.

The Saudi foreign minister reaffirmed kingdom's support for the Kashmir cause, the statement said.