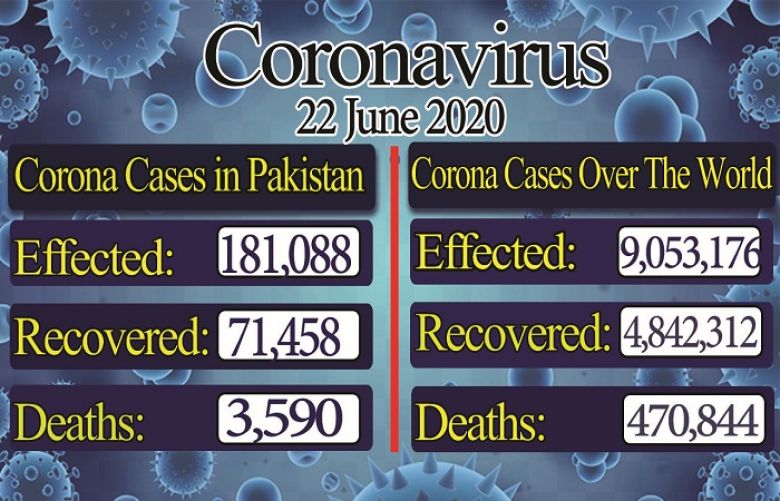 The number of confirmed COVID-19 cases in Pakistan rose to 181,088 on Monday after new infections were confirmed in the country.

The province-wise break up of the total number of cases as of June 22, is as follows:

Pakistan has allowed transit trade and import from Afghanistan from Chaman and Torkham border terminals besides opening of Ghulam Khan terminal for bilateral trade from today, reported Radio Pakistan.

According to the Foreign Office, this arrangement will be in operation six days a week to further increase trade

Saturdays will be reserved for pedestrian movement on these border crossing terminals, the Foreign Office added.

Pakistan allows import, manufacture of Remdesivir for emergency COVID-19 use

The Drug Regulatory Authority of Pakistan has allowed the import and manufacturing of antiviral Remdesivir for severely ill COVID-19 patients, Radio Pakistan reported on Monday.

Registration letters were issued to two importers and 14 local manufacturers.

Remdesivir is an experimental antiviral drug that was invented as a potential treatment for Ebola. It has been approved for emergency use in Pakistan, according to the spokesperson of the Ministry of National Health Services.

DRAP’s registration board in its meeting held from June 8 to 11 had allowed the emergency use of Remdesivir.

The US Food and Drug Administration granted emergency use authorisation of the drug on May 1.