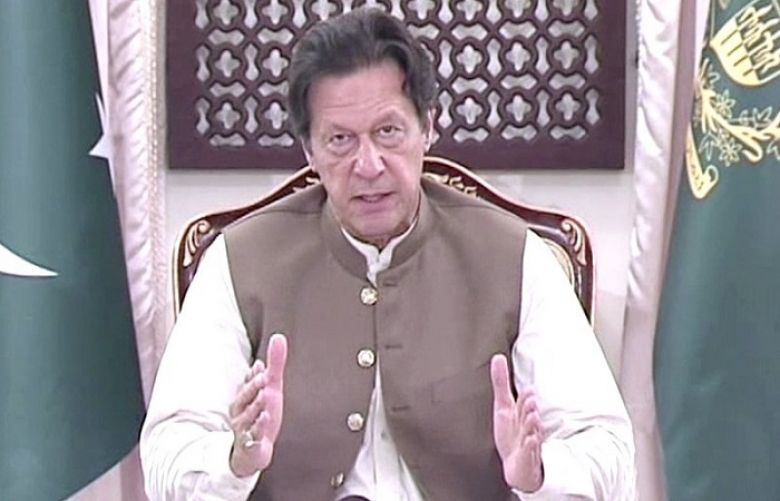 Prime Minister Imran Khan in a live televised address apprised the nation on the decisions made regarding the lockdown in Pakistan to contain the novel coronavirus during the National Coordination Committee (NCC) meeting held on Monday.

Noting that the National Command and Operation Center (NCOC) met every morning and consulted everyone, including health experts from Pakistan and around the world, on every step, PM Imran spoke of the country's response and the current situation regarding the coronavirus.

"Since day one when we got to know that the coronavirus had started spreading in Pakistan, we imposed a lockdown following a national security committee meeting.

"We observed the conditions in Chinese city of Wuhan and in Europe when the virus started spreading and we were seeing how the world was responding. But at that time, when we had discussions and meetings, I was very clear on the path Pakistan had to take.

"Pakistan's situation is different than that in China or Europe," he said, noting that he had earlier informed the nation that 25% of the country's population was below the poverty line, which "means that nearly 50 million people in our country do not eat two full meals a day".

"After doing calculations, we figured out that there are 25 million people who are daily wagers and who get paid weekly and whose households had to remain hungry if they did not earn for one day," he added, saying those families comprised 12-15 million people in total.

The labourers and daily-wagers, he added, were part of the informal, unregistered economy.

"The virus spreads at a fast pace [and] imposing lockdown is not the cure to it... It only slows the spread of the virus. The lockdown helped reduce pressure on doctors and health workers in hospitals," he said.

"A lockdown is different for different people in Pakistan as well. There are people who live in palaces and there are those who live in slums — their approaches to the lockdown were different.

"Some 30-35% people in Karachi live in katchi abadis [slums]. What effect would the lockdown have had on them? On the one hand, we had the wealthy elite, whose attitude was completely different and who were demanding lockdown because there was a lockdown in Europe.

"On the other hand, we had the poor people and households where seven, eight or 10 people live in one room, the taxi- and rickshaw-drivers, the daily-wagers.

"I did not want a lockdown like the one that was imposed in Pakistan [but] due to the 18th Amendment, the provinces had the authority and took their own decisions due to pressure.

PM Imran said doctors, elite, and the poor all had diverse opinions but it was the downtrodden ones of the society who did not have a voice.

"But in hindsight, I should not have stopped businesses and construction because we had to balance it. Coronavirus is not going away until a vaccine is not formulated. We have to live with it," he said.

"America — where 100,000 people have died and which has given a stimulus of $3,000 billion — has also decided to lift the lockdown as their economy would collapse because there is no guarantee that the virus will go away if a lockdown persists," he said, noting that it was the wealthiest country of the world.

"We have only given $8 billion to-date... Even if we keep people under a lockdown, there's no guarantee that the virus will spread again when the lockdown is lifted because the virus is there as is.

"If we have to successfully live with the virus, it is the responsibility of the people. If they take precautionary measures, we can tackle the virus and live with it. If we close specific areas, then the businesses of those areas will be affected," he added.

PM Imran mentioned that the government had prepared a 'negative list' of sectors that would remain shut down but "we have opened everything else". The list, he added, "will be shared later in the day as a debate is being held over the resumption of tourism".

"Several places only earn in three to four months of summers and if we do not open the tourism [industry], people will be adversely affected due to no income," the premier said, noting that the governments of Khyber Pakhtunkhwa and Gilgit-Baltistan were mulling over it.

Citing the example of India, he said the lockdown had caused adversities there and people were forced into extreme poverty.

"They have also lifted their lockdown as their economy cannot bear it anymore," he said. "I want [the medical fraternity] to know that there are millions who have been affected by the lockdown.

"We are not in a state to extend the lockdown as it has had an adverse effect our economy. Our exports have plunged and we fear that our remittances might fall as well.

"The government feels for you. Do not think that we do not take your conditions into account. I have decided to hold a meeting with their representatives as well.

"I want overseas Pakistanis — especially labourers stranded in the UAE, Saudi Arabia, and some others in Europe — to know that we are discussing how to bring them back.

"Nearly 80-90% cases were imported and we closed off the airspace due to such circumstances. We have decided to bring Pakistanis back. We will test them and those who test positive will be asked to self-isolate at homes.

"Those with diabetes, blood pressure, and the elderly face a risk from the virus. If we implement the SOPs, we can save their lives as well. We are bringing a programme with which people can get to know about where the ventilators are available," he said.

Earlier, sources had informed Geo News that the NCC in its meeting had decided to maintain a complete lockdown on weekends to curb the coronavirus and to not change shop timings. It also eased the restrictions for Fridays.

The meeting had commenced at 4:30pm under PM Imran's leadership and included the chief ministers of all the four provinces, federal ministers, National Disaster Management Authority (NDMA) chairperson, and the provincial health ministers.

Special Assistant to the Prime Minister on Health Dr Zafar Mirza was expected to give a briefing on the spread of the virus and the death rate across the country, while the focal person on coronavirus, Dr Faisal Sultan, was to provide a brief on the overall situation.

The meeting discussed and formulated effective coronavirus prevention strategies and reviewed treatment provided to patients along with the availability of hospital beds, ventilators, and other resources required by medical centres.

In its May 7 meeting, the NCC had decided to extend the lockdown till May 31. However, markets and shopping malls were opened for the public with SOPs on the directives of the Supreme Court.

A Saturday meeting of the NCOC under Planning Minister Asad Umar had mulled over the country's new “Living with the Pandemic” strategy to cope with coronavirus.

"The NCOC recommended that the educational institutions be closed till August as the summer season and pandemic would be at peak in July," a statement from the government had read.

The meeting had sought the provinces' feedback on a "negative list" aiming to finalise the recommendations of opening some more sectors of the economy halted due to the coronavirus outbreak.

"The forum insisted that the marriage halls should only be allowed with [a] limited number of guests, one dish and strict compliance of standard operating procedures (SOPs)," the statement had read.

Moreover, Umar had directed the concerned authorities to calculate the economic impacts of the virus in the first quarter of the current calendar year.

The meeting was also apprised about the critical care resources that needed to be increased owing to the surging risk of the pandemic.