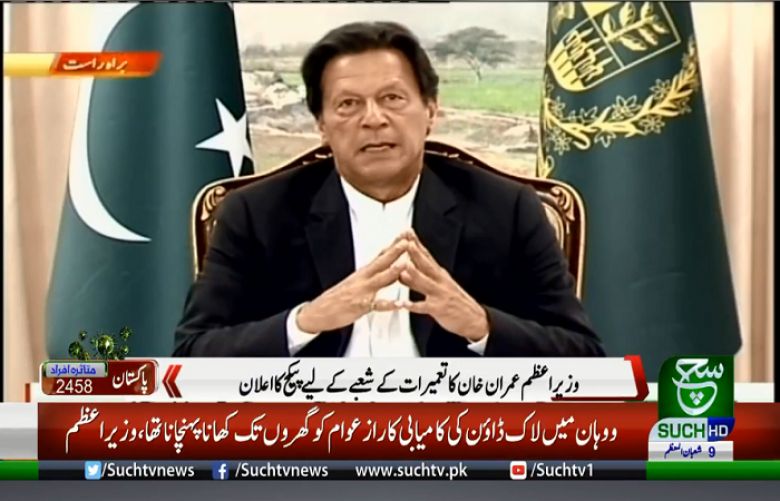 Prime Minister Imran Khan on Friday announced a relief package for the construction sector, saying that it was necessary to maintain 'a balance' between the lockdown and economic activity.

The prime minister was speaking to media after chairing a meeting at the National Command Centre office. The premier announced a set of incentives for the construction sector, saying that his main objective was to provide employment to the labourers so that they can be saved from "hunger and the coming difficult circumstances."

PM Imran said that persons or entities who invested in the construction sector this year will not be asked about their source of income. "The government has decided to agree to the demand of the construction sector and has introduced the fixed tax," he said. "This [move] will bring down the amount of tax to be paid. Also, if the investment is for the Naya Pakistan Housing Scheme, we will exempt 90% of the tax on it," he said.

He said that withholding tax on materials and services had been abolished in the informal sector. "Tax will be collected only on steel and cement, mainly because these are the formal sectors," he said.

PM Imran said that the government will not collect any capital gains tax from "any family that wants to sell its house". He announced a Rs30bn subsidy for the Naya Pakistan Housing Scheme, saying that on the one hand, it will regulate economic activity and on the other, ensure houses for the poor were also built.

The prime minister said that the government ensuring that the construction sector was given the industry status and announced the formation of The Construction Industry Development Board. "An institution will be formed, for the first time, to promote the construction industry in Pakistan," he said.

The premier said that the government will focus on other sectors to gauge whether they can be provided relief so that a balance could be dtruck between the lockdown and regulation of economic activity.

He spoke about the Coronavirus Relief Fund, saying that the government had started it solely for the benefit of the poor in Pakistan. "We will start giving out cheques in the next three to four days," he said, adding that four million people have registered for the funds.

Speaking about the coronavirus, the prime minister said that this was an unprecedented crisis and that every nation was trying to battle the virus in its own way. He cited the example of the US, saying that various states of the country were using different methods to mitigate the damage of the virus.

In response to a question about the need to unify the nation, the prime minister said that Pakistanis stood together whenever they were faced with a calamity. "I only have reservations against people who use calamities to hide their corruption. This will not happen," he said.

Speaking about the difference between the state and provinces in tackling the coronavirus pandemic, PM Imran said that he didn't want to force provinces to do anything after the 18th Amendment had been passed.

"In Pakistan, on the one hand, you have the coronavirus and on the other hand, you have to deal with hunger,' he said. "A lockdown imposed only in Defence or Gulberg will not be successful. The success of a lockdown will depend on whether the poor will get food at their houses or not."

He cited China's example, saying that authorities had locked down Wuhan but that measure had been successful as the government had provided food to people at their doorsteps.

PM Imran said that it wasn't possible for anyone to predict whether the coronavirus will take a turn for the good or the worse. "We, as a nation, will fight [this disease] but no one can say what will happen in the next two to three weeks," he said.