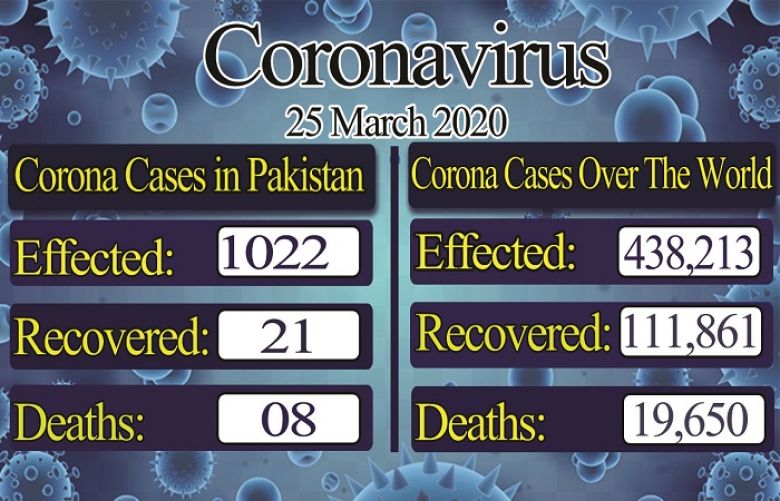 Pakistan's tally of COVID-19 cases rose to 1022 on Wednesday after new cases were reported across the country and total of eight deaths have been reported.

413 cases have been diagnosed in Sindh, 310 in Punjab, 117 in Balochistan, 80 in Khyber Pakhtunkhwa, 80 in Gilgit-Baltistan, 20 in Islamabad; and one in Azad Jammu and Kashmir. On other hand 21 patients have been recovered from coronavirus.

In a Covid-19 update, Chief of Army Staff (COAS) Gen Qamar Javed Bajwa said that the Pakistan Army is cognisant of the challenges facing the people of Gilgit-Baltistan.

"We are working closely with GB govt and civil administration to provide all possible support while additional resources are being arranged on war footing in conjunction with federal government," the army chief was quoted as saying in a tweet shared by Director General of Inter-Services Public Relations (ISPR).

"We will never leave the people of GB alone in these challenging times. Pakistanis will fight against Covid-19 as one.”

Read more: Turkey is taking care of Pakistani citizens like their own people: Mevlut Cavusoglu

Turkish Foreign Minister said this in his telephonic conversation with Pakistani counterpart Shah Mehmood Qureshi. Both the leaders discussed international challenges and the ways to control over corovirus outbreak.

Rumor rejected by Minister for Religious Affairs and Interfaith Harmony

Minister for Religious Affairs and Interfaith Harmony Sahibzada Noor-ul-Haq Qadri rebuffed the rumours circulating on social media regarding ban on Hajj this year amid coronavirus outbreak.

“The Hajj preparations are going on as usual and we are in continuous contact with the Saudi Hajj and Umrah ministry,” he said.

Sindh remains the worst affected province by the coronavirus in the country so far, with a total of 413 coronavirus cases. In Karachi alone, the numbers of cases of the virus are 144, with the majority said to be cases of "local transmission".

Chief Minister Punjab Usman Buzdar has directed immediate up-gradation of testing laboratories in all divisional headquarters of the province, amid coronavirus fears.

The interior ministry on Monday issued a notification according to which Pakistan Army troops were deployed throughout the country to help tackle the spread of the coronavirus.

"The Competent Authority, in exercise of the powers conferred under Article 245 of the Constitution of Islamic Republic of Pakistan and Section I31-A of CrPC is pleased to authorize deployment of sufficient strength of troops of Pakistan Army in Punjab province depending upon the requirement to be worked out by the provincial Government in liaison with the Army authorities in connection with the prevailing situation related to the spread of COVID-19 and matters ancillary thereto, subject to laws enforced in Pakistan," read the notification for Punjab.

The State Bank of Pakistan on Tuesday announced yet another cut in the interest rate, this time slashing it by 1.5% to 11%, saying there was "considerable uncertainty" over the impact of the coronavirus pandemic.

In a press release, it said the move — almost a week after the policy rate was cut by 75 basis points to 12.5% — was aimed "to facilitate businesses and exporters who seek loans frequently from commercial banks to run their businesses".

The Tokyo Olympics are to be postponed until 2021 after talks between Japan’s prime minister, Shinzo Abe, and the International Olympic Committee president, Thomas Bach.

“We agreed that a postponement would be the best way to ensure that the athletes are in peak condition when they compete and to guarantee the safety of the spectators,” Abe told reporters shortly after his conversation with Bach, adding that the Games would be held by the summer of 2021.

UN Secretary-General Antonio Guterres urged warring parties across the world to lay down their weapons in support of the bigger battle against COVID-19, the common enemy that is now threatening all of humankind.

"The fury of the virus illustrates the folly of war," he said in a brief speech at UN headquarters in New York, mentioning no country by name. "That is why today, I am calling for an immediate global ceasefire in all corners of the world."

German Chancellor Angela Merkel will quarantine herself at home after being treated by a doctor who has since tested positive for the novel coronavirus, AFP quoted a government spokesman as saying.

“[Merkel] has decided to quarantine herself immediately at home. She will be tested regularly in the coming days (and) fulfil her official business from home,” Steffen Seibert said in a statement.

It could take some time to determine whether the chancellor is herself infected as “a test would not yet be fully conclusive,” Seibert said.

On other hand, Former movie producer Harvey Weinstein, who is serving a prison sentence for sexual assault and rape, has tested positive for the coronavirus, according to the head of the state corrections officers union.

Powers said he learned that the test came back positive on Sunday morning and is concerned about the corrections officers, who he said lack proper protective equipment. Several staff have been quarantined, Powers said.