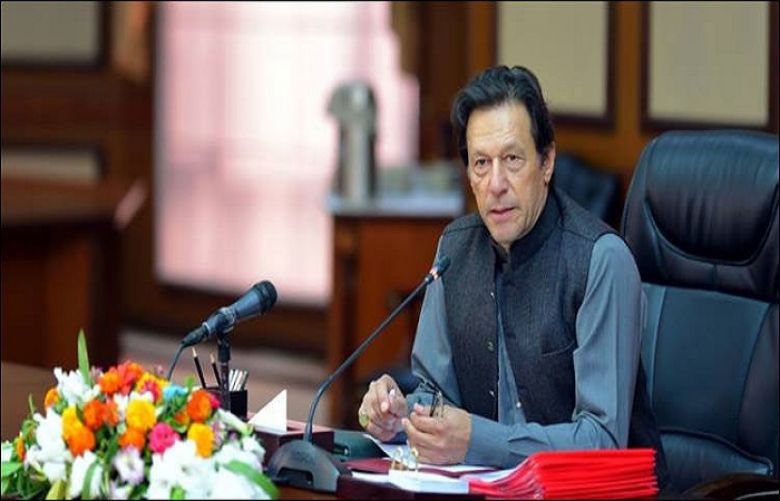 Prime Minister Imran Khan on Wednesday stressed upon reviewing the "extreme steps" taken by the provinces to contain the spread of the coronavirus as these would "impact the economy drastically".

Addressing a parliamentary leaders’ conference in Islamabad, PM Imran called for the lifting of the ban on transport, saying it would badly affect the supply of essential items in the country.

“Gilgit-Baltistan is facing fuel shortage and yesterday, supply from the port was stopped due to the lockdown in Karachi and we had to take necessary steps in this regard,” the prime minister said.

He added there was no precedence in the world of such a lockdown.

"The federal government can not do this alone; we have to have a national response to fight the epidemic," the premier said.

Requesting the political leadership of the country to give their input and suggestions, the prime minister said, "We have a meeting of National Coordination Committee tomorrow where we will review the situation arising after the lockdown."

"There are multiple levels of lockdown and a curfew is the last stage," the premier said, adding that his concern was the poor section of the society which will bear the brunt of such measures.

"Sindh was the first province which announced it is imposing a lockdown and then under pressure from the media, all the other provinces and Gilgit-Baltistan and Azad Jammu Kashmir followed suit," said the premier.

Addressing the Taftan controversy, PM Imran said the army and Balochistan government made great efforts in taking care of pilgrims coming from Iran.

Iran could not deal with the situation and then brought our nationals to the border, leaving us no option but to allow them back into the country, he said.

The prime minister added, "Our decision to not evacuate students from Wuhan proved right. We received criticism from everyone but you see, there is no case of coronavirus from China."

"We must not take decisions under fear," he said. “We have to win the fight against coronavirus and we can do this together.”

Shehbaz, Bilawal walk out in protest

Meanwhile, drama ensued when Leader of the Opposition in the National Assembly Shehbaz Sharif and PPP chairman Bilawal Bhutto Zardari walked out of the conference, citing the absence of the premier, who had left the session after a brief appearance.

"Is this his level of seriousness? He did not think it important to participate in the full session," remarked Shehbaz.

"The country is faced with the worst calamity in history and the premier is absent."

"If this is his level of seriousness, we too will not participate in the session," said Shehbaz.

He regretted that the premier "does not even realise that the session was meant to be a consultative one".

"We did not have political designs in coming here. We wanted to sit down to debate on how we can save the country together."

Other members of the PPP and PML-N, however, continued their participation in the session.

Speaker National Assembly Asad Qaiser had called the meeting last week, inviting parliamentary leaders to parliament house for an in-camera briefing on the impacts of COVID-19.

A formal notice was sent to all parliamentary leaders in the National Assembly as well as the Senate of Pakistan.

However, due to the growing severity of the virus's spread, the format of the meeting was changed to a video conference.

On Tuesday, all major political parties except the ruling Pakistan Tehreek-e-Insaf had also participated in a multi-party conference jointly organized by PML-N and PPP on the issue.

The joint declaration called upon Prime Minister Imran Khan to play his role as the prime minister of Pakistan, and not only of Islamabad Capital Territory, and to curb the menace of the coronavirus through an immediate complete lockdown of the country instead of wasting further time.

The participants emphasised that there should be a national approach, with no province left out of the consultative loop and suggested that PM Imran should call a meeting of the Council of Common Interests (CCI) on a daily basis, so that all federating units are taken on board and no one is left out.

The participating parties endorsed PML-N’s national strategy recommendations, which had been presented by Shehbaz Sharif.

All parties had urged the restoration of the local governments in Punjab, which are closer to communities and can play an effective role in any community-related initiative.