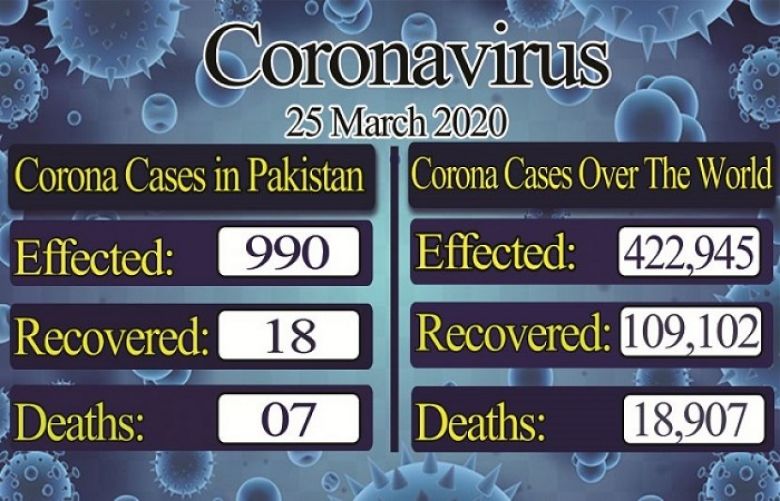 The number of confirmed cases in Pakistan rose to 990 after Punjab reported three new cases and total of seven coronavirus-related deaths have been reported.

407 cases have been diagnosed in Sindh, 267 in Punjab, 110 in Balochistan, 78 in Khyber Pakhtunkhwa, 80 in Gilgit-Baltistan, 15 in Islamabad; and one in Azad Jammu and Kashmir. On other hand 6 patients have been recovered from coronavirus.

Sindh remains the worst affected province by the coronavirus in the country so far, with a total of 407 coronavirus cases. In Karachi alone, the numbers of cases of the virus are 130, with the majority said to be cases of "local transmission".

Remember, Sindh Transport Minister Awais Shah has said on Monday Intra-city transport is also banned in the province due to lockdown amid increasing cases of coronavirus.

The interior ministry on Monday issued a notification according to which Pakistan Army troops were deployed throughout the country to help tackle the spread of the coronavirus.

"The Competent Authority, in exercise of the powers conferred under Article 245 of the Constitution of Islamic Republic of Pakistan and Section I31-A of CrPC is pleased to authorize deployment of sufficient strength of troops of Pakistan Army in Punjab province depending upon the requirement to be worked out by the provincial Government in liaison with the Army authorities in connection with the prevailing situation related to the spread of COVID-19 and matters ancillary thereto, subject to laws enforced in Pakistan," read the notification for Punjab.

Read more: Coronavirus a danger 'we have never seen in our lifetimes': DG ISPR

Director-General of the Inter-Services Public Relations Maj Gen Babar Iftikhar said coronavirus was a danger that "we have never seen in our lifetimes" but that the Pakistan Army was fully aware of its duty and would counter the pandemic with the nation's help.

German Chancellor Angela Merkel will quarantine herself at home after being treated by a doctor who has since tested positive for the novel coronavirus, AFP quoted a government spokesman as saying.

“[Merkel] has decided to quarantine herself immediately at home. She will be tested regularly in the coming days  (and) fulfil her official business from home,” Steffen Seibert said in a statement.

It could take some time to determine whether the chancellor is herself infected as “a test would not yet be fully conclusive,” Seibert said.

On other hand, Former movie producer Harvey Weinstein, who is serving a prison sentence for sexual assault and rape, has tested positive for the coronavirus, according to the head of the state corrections officers union.

Powers said he learned that the test came back positive on Sunday morning and is concerned about the corrections officers, who he said lack proper protective equipment. Several staff have been quarantined, Powers said.

UN Secretary-General Antonio Guterres urged warring parties across the world to lay down their weapons in support of the bigger battle against COVID-19, the common enemy that is now threatening all of humankind.

"The fury of the virus illustrates the folly of war," he said in a brief speech at UN headquarters in New York, mentioning no country by name. "That is why today, I am calling for an immediate global ceasefire in all corners of the world."

Showbiz celebrities messages to the fans

Pakistan's leading actress Ayeza Khan has urged her fans to set up a bedtime routine for their children as the kids are vulnerable to catching viruses.

Sharing an adorable photo on her Instagram, actress said, “Your children need atleast 10 to 13 hours of sleep, Set up a bedtime routine no matter they have school in the morning. Because body needs recovery, especially kids, as they are equally as vulnerable to catching viruses as an old person.”

Pakistani singer Ali Zafar has appreciated the decision of Sindh government for a complete lockdown for the next three days amid coronavirus outbreak.

In a series of tweets the singer appreciated the decision of Sindh government and urged the multinational companies to make arrangements to provide food and beverages or cleansing products free of cost for the poor.

In a Covid-19 update, Chief of Army Staff (COAS) Gen Qamar Javed Bajwa said that the Pakistan Army is cognisant of the challenges facing the people of Gilgit-Baltistan.

"We are working closely with GB govt and civil administration to provide all possible support while additional resources are being arranged on war footing in conjunction with federal government," the army chief was quoted as saying in a tweet shared by Director General of Inter-Services Public Relations (ISPR).

"We will never leave the people of GB alone in these challenging times. Pakistanis will fight against Covid-19 as one.”